Relationship Takes On A Plane

Watching a movie on an airplane is like playing poker. You get delt a bad hand and you are losing regardless of how stupid the dealer may be. A little over a year ago I got all aces in a flight coming back from Cancun with my wife. I won a lot more than money .

Bobina was exhausted. Our delayed honeymoon and first anniversary on November 2009, was a week in Mexico in on the beach, in the streets of Cancun, and around the resort of the Crown Paradise. By the time we came back through customs and started home, I was knee deep into insomnia while Bobina was out for most of the flight. The movie selection on our flight was some romantic comedy and this quirky independent flick I hadn't heard of starring the kid from 3rd Rock from the Sun sitcom, Joseph Gordon-Levitt and Zooey Deschanel, the weird named, icey eyed brunette who is the sister from the girl on Bones. I didn't have a magazine worth reading so I put on my poker face, and pushed start on 500 Days Of Summer. 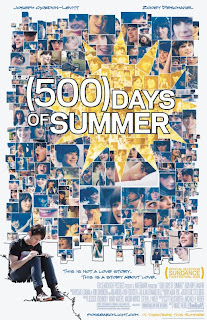 I want you to see the movie if you haven't and thus don't want to give away too much of the plot or the surprise emotional results of the actors and the movie making. The jist of what you need to know to explain my blog theme is this; Levitt plays Tom, a greeting card company writer who really wants to be an architect, Deschanel plays Summer, an assistant at the card company that eventually becomes Tom's "perfect" girlfriend. The relationship fails, but how it fails and the hilarious, but poignant aftermath not only make a good movie but also shows how "point of view" especially from only one side of the story can affect a person's personality. 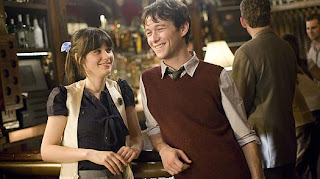 I'm divorced, have a horrible history with not only romantic relationships but friendships as well. Until I met Bobina, I seriously thought I was, like Tom in 500 Days of Summer, a doomed victim of every awful woman, jerk guy, and mixed up human being that ever crossed my path. What I learned, especially from the great relationship I have now with the right person, is it's my point of view and approaches to relationships and friendships was so poorly skewed, I was the problem, not everyone else.

500 Days of Summer bounces back and forth between different days in the tale. On the surface, it appears Tom is this normal guy, victimized by the oddball ice queen, Summer, who doesn't care for Tom like she should. When things go south for Tom and Summer, it's Tom who devolves into funny, but sad depressive behavior of booze, junk food, and emo music. The subsequent turn of events shows Tom, as Summer moves on more maturely, that he idealized Summer. This a mistake so many guys make (and some women, I'm sure).

The idea that anything is perfect, great, amazing or the best is foolish. As much I love my wife and kids, it's their complexity that makes them interesting. Their flaws, like mine, are what should be celebrated not ignored. Unfortunately so many people, especially when they are in the throes of lust or smit or the delusions of being in love they paint the other as perfect. This never works. This idea extends to friendships. The minute you think your friend is beyond reproach, they'll disappoint you and you aren't just broken hearted but disillusioned too.

This happens to Tom. He sees Summer as the perfect woman, which reduces her uniqueness and makes her a stereotype as opposed to a real woman. Both characters are in their early 20s and this is common at that age. Suddenly everything turns into a phase for Tom and Summer as opposed to a relationship. How he gets out of the funk is funny, interesting, and worth every minute on a plane.

I am so fortunate to be in my marriage to Bobina. The best thing we do together is communicate. I see through my friends, especially the younger ones, their trumpet of only the positive aspects of their relationships. This is parallel to the ideas expressed in my Facebook post a couple of days ago. We get too impatient, too selfish, wanting our emotional gratification right now. If there is one thing I can export from my relationships with my wife and kids to any of you, is patience and selflessness are the bread and butter of happiness. Learn to rock those, right now, or you will be like Tom in 500 Days of Summer.

Today's song is one featured in 500 Days of Summer. Please, Please, Please Let Me Get What I Want by The Smiths. It's played twice, at two very different places in the film. I recommend the movie, because of it;s unqiue point of view, smart script and the likely idea that after seeing what happens to Tom and Summer, you'll change the way you get along with your significant others, romantic relationships and friendships. Plus, it's The Smiths. Maybe my "good friend", Smiths guitar player Johnny Marr will check this blog post out. Now, that I think about it, when I'm not working on my marriage to Bobina, I need to work on my "friendship" with Johnny.

P.S.  I owe the inspiration, partly. for this post, to Leah aka @WalmartGourmet. She was watching 500 Days of Summer. That reminded me of my airplane flight.