My girls worry about me sometimes. The youngest ones think I need something to protect me in the car on my long drives. Carly, the six year old, bought me the Spiderman. Lyla, the seven year old, knows Green Lantern was a favorite of mine when I was their age, so she got me, him for my last birthday. I thought that the girls saw Spiderman and Green Lantern as heroes and thus, considered their "powers" real so that's why they thought I needed them. I was wrong. Talking to Carly and Lyla aka Goose and Bug, they told me that, when I was a little boy, superheroes were important so I would like having them to protect me. According to them, they don't need superheroes. They have mommy and daddy and sometimes their oldest sister when she isn't being mean. This, of course, made Bobina and I swell with pride but then we started thinking about what comic books, Star Wars people. superheroes, Disney Princesses, etc meant to all three of our kids. They told us they just liked them, they were funny, fun to watch, and fun to play with but they weren't "real". Maybe my kids are weird, well ok, they are, but I think today's children are more self aware and quite frankly, smarter, about what real life means to them.
Today, I read an article about the people who are now caretaking the Superman comic book image, changing him to be edgier, more maleviolent, moodier, and even changing his costume to a hipster vibe with a hoodie and skowl. http://www.ontheredcarpet.com/2010/10/superman-gets-hipster-makeover-in-superman-earth-one-graphic-novels-poll.html
At first I tweeted how dumb it was, but then I started thinking; if my kids don't put superheroes on a lofty perch, then maybe today's comic book writers need to make Superman less symbolic and more entertaining. Heck, I always thought Superman was an alien dork who needed to loosen up and be dark like Green lantern and a smart alec like Spiderman. I don;t know if a hoodie, bad attitude, and edgier storyline will do it, but if it makes little boys and girls more entertained, and less confused about what and hwo real heroes are, I'm all for it. I'm traveling in a rental car right now. I miss my Spidey and Lantern. Hope my Spidey sense and power ring are transferable over 800 miles. Wait, what am I saying? Hope my kids don't read this. I'm supposed to be their hero. I should have written all this in the Comic Sans font. 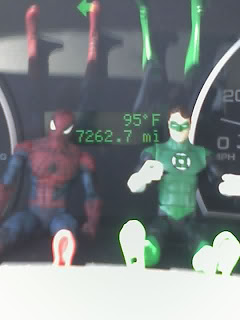