I laughed when I saw the Nirvana concert t-shirt at Target. The only time I could have seen them, early 1992, reminded me of a black eye. "Kurt Cobain should ban you from the show for liking Bon Jovi too." That was the last straw for my friend who bought the tickets. Then I said something else obnoxious, and he punched me. I chuckled through the pain, ending the friendship with another stupid comment. I recalled the last thing he ever said to me, "You don't have the credentials to insult people like you think you do!" I bought the t-shirt. 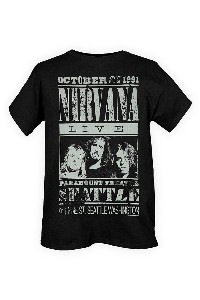 *blogger's note* This is my entry for @velvetverbosity 's 100 word challenge at  http://http://www.velvetverbosity.com/ . This week's one word prompt is CREDENTIALS. This is a partially true story of how my music snobbery gets me in trouble. I never had Nirvana tickets, but I did get sucker punched for saying Bon Jovi sucks. I still feel that way. Kurt would have been proud of me. I do own that t-shirt.