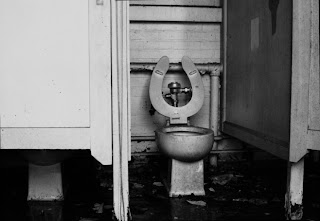 Looking through the maroon curtain, I saw several hundred people in the college amphitheater. Two female students were stooled onstage, tuning their acoustic guitars. I walked inside the mens bathroom, hearing my bandmates arguing. "No way in hell am I playing our first gig ever named samesexunicorns. I'd rather be stabbed in the eyes.", the bassist, Kraig, complained. Writing on the dingy wall above a urinal, Aaron, the drummer, said "stab spelled backward is bats." Seizing a moment, I proclaimed "Fine, this place is about to be rocked by The Stab Bats." No one said anything, we just happened.

*blogger's note* This is my contribution to @velvetverbosity 's 100 word challenge at http://velvetverbosity.com/ . This week's one word prompt is STABBED or DEB BATS spelled backward. This is based on a partially true of a college's friend's band, in 1991, who renamed themselves before their first gig, minutes before playing. It was their only performance.
Posted by Lance at Tuesday, January 04, 2011