What You Don't Know Can Hurt You

I felt like an egg frying that September afternoon as the sun beat down on my dark blue suit. I walked out of the courthouse a free man, divorced, yet I felt like I was caged by the doubts of people who "knew" me. A man I don't know feels the same way today. But, he's a lot colder than I was five years ago.

Jay Cutler is a the quarterback for the Chicago Bears. He makes several million dollars a year. His girlfriend is Kristin Cavallari of Laguna Beach and The Hills television shows. 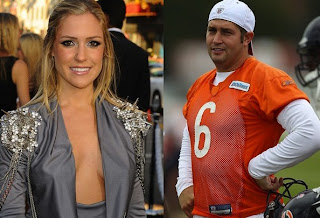 Jay went to Vanderbilt University. He has a lot going for him. I feel quite sorry for him. As he gets out of bed this morning, in the one digit degree weather of Chicago, he likely feels imprisoned by the assumptions made by people he works with, against, and around as well as those who have followed his career as an NFL player. 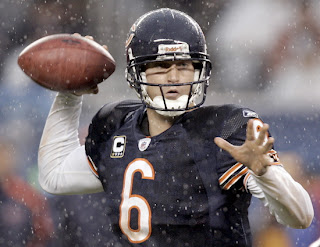 Yesterday, while his team struggled in the NFC Championship game against the Green Bay Packers, he complained of an injured knee. What happened after that is pure speculation. By the time the day turned into night, Chicago Bears fans burned his jersey, other NFL players called him a quitter, and the court of public opinion is convicting him of having no heart. Call me one of the few jurors who is voting not guilty.

I won't go into details of what happened to me five years ago. There's no point. I got a divorce. I became a single father for a while. Eventually I met the love of my life in my wife and daughters. There's no reason to pointificate further. It's unfair to the other people involved who don't have a blog or a twitter account. I write that I can relate to a star NFL quarterback with a starlet girlfriend and a bank account full of money because I know what it's like to be ostracized, criticized, and marginalized by people who should know you better. My dress shirt wasn't burned in effigy that day, but I felt horrible for myself, the situation and wondered what to do next. I also learned, maybe, the most valuable lesson of my adult life. Don't judge others and don't let others' judgements of you, define who and what you are.

I don't know if Jay Cutler quit on his team. I doubt it. You don't achieve at the level he has and then stop wanting to be elite. That's not likely. I don't know if Jay Cutler has a knee injury. He'll find out soon. It's easy to say "you'd have to drag me off that field" or "it's the big game, he should be tougher". I'm not Jay Cutler and neither are you. I do know that making assumptions hurts me and everyone involved with me. I'm bad at a lot of things. Gossip and speculation are two that I fail miserably. I get called contrarian, difficult and hard-headed because I don't always side with the popular opinion or conventional thought of the day about a situation. I have supported friends who were as unpopular as they could be and been right about my support and dead wrong other times. I just believe in what I know. I don't know if Jay Cutler ditched his team when they needed him the most. I did know what kind of person I was five years ago and what kind of person I am now. I need to remember that the next time I make an improper assumption or draw a wrong conclusion about my family, friends or football players I see only on television.

Today's song is not only good rock and roll from Cage the Elephant but it's an anthem for the misunderstood, which I consider myself a member of. There are some naughty words in the chorus and one verse, so listen while the children are away from your computer. Pay attention to the lyrics, though, ribald as they may be at times, they are very straight forward in their message of not judging books by their covers or making up your mind on people right away. Here's In One Ear, play it loud;