I grew up thinking tattoos were weird. I even admit to prejudice to the unnaturally adorned. Then, when I was 18, I witnessed a close friend get tattooed in Panama City, Florida. Suddenly, with it front of my face, I became transformed into a fan of body art.

I have 7 tattoos, my left ankle, both hips, both biceps, my left shoulder, and my left pectoral. The story behind a few of them are somewhat interesting. I try not to be boring all the time. Some people tell a story with their designs. I think of my Magnificent 7 as symbols of periods of my life. So here's the rundown in order of application.


In a tattoo shop in Panama City, Florida, in 1993 with a group of just out of college, partying friends. None of us were in our right minds. I sobered quickly when the color was put into the tattoo. It was an ink badge of a high school nickname, Speedy Gonzales. I regret getting it. For one, I don't usually go for for color tattoos; and two, my friends picked it out. 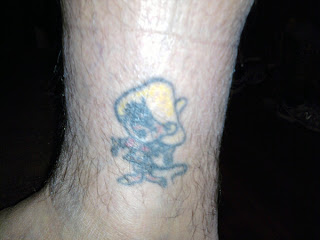 I researched the next one. I am a fan of black and white with some shading designs. So I took my time, planned this tattoo. I got it in New York in 2006. It's an Egyptian Falcon God symbol on my right bicep, that later became a Christian solider image about 2,000 years ago. It means father or protector, which was a representative of my duties as dad. 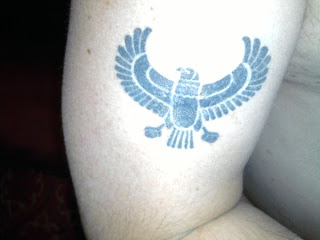 A year after my right bicep tattoo, I was in Los Angeles and ventured into Kat Von D's High Voltage Tattoo Shop on La Brea. I got a rising phoenix design to signify my rebirth after a divorce and this making me free to take on the next phase of my life. As I was walking into to the place I saw Kat Von D, walking out with the former manager of Guns N Roses, Vicky Hamilton, walking out. That was a double dose of awesome that probably clouded my judgement in paying too much for the tattoo on my left bicep. 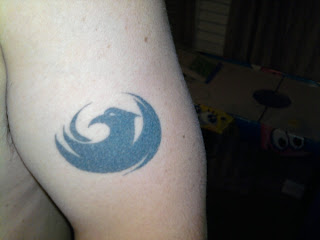 I met my wife, the aforeblogged Bobina, six months after the Los Angeles experience. She had never been inked, so when we got married in November of 2008, we decided to get tattooed together in Lawrenceville , Georgia, near where we lived, and went over the top of wedding rings with matching Chinese love symbols on our right hips. I guess, if she ever gets rid of me, I'll have to find someone with the same tattoo or things could get awkward (sarcasm). 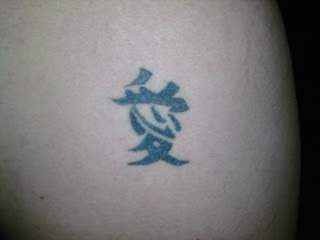 A few months later, in 2009, Bobina and I went together to get more work done. This time we tried out a new tattoo shop near our newer house, in Buford, Georgia. She got a multi-colored butterfly deal in the middle of her shoulder blades and I decided to even up my hips with a safe Chinese symbol for strength. I'm aware this is a common tattoo. I was looking for symmetry and to be moral support for my wife as she got something intricately awesome. 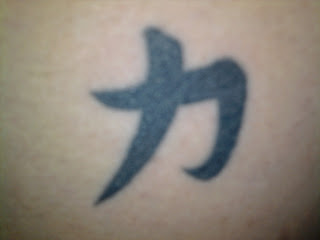 Tattoo six came about a year later, 2010, as I wanted to show something symbolic of my other children. I am part Cherokee Indian, so I went with a native american design that meant father, with my daughter's initials T for Tay, L for Lyla (Bug), and C for Carly (Goose). I am not that large of a fan of The Learning Channel or tender loving care. This is probably my favorite tattoo. The final tattoo was another show of support for The Bobina who was getting her dream body art design of a flower with colors in the middle of her shoulder blades, showing her three kids. I went for an Apache protection arrow on my left pectoral muscle. We used the same local shop. They like us and we like them. 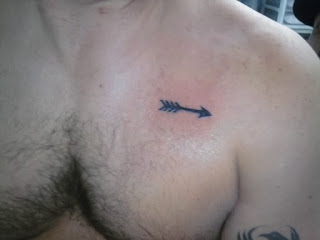 So there you have it. Seven tattoos, showing what's important in my life, with a few almost interesting stories. My wife has three and wants more. Since I seem to get inked when she does, you might see another tattoo post in the future. As always, I'll show you mine if you show me yours. Let me know what you got and why. I like tattoos and really like the stories behind them.

*sidenote* I saw the movie The Fighter tonight. It's outstanding. Mark Wahlberg as boxer Irish Mickey Ward, Christian Bale as his brother Dickie Eckland, Melissa Leo as their mother, and Amy Adams as Mickey Ward's girlfriend, later wife, Charlene are all excellent. Rent it asap. The performances alone are worth it; but the true, unbelievably inspirational story is worthy of your two hours.

Today's song is a recovery from yesterday's break from music snobbery.

It's from The Rolling Stones 1981 album Tattoo You. The lyrics aren't the point here. I wanted something upbeat, good, and from the Tattoo YOU album to go with the Tattoo Me post.