I've taken a lover. She's actually an old lover but we've been apart for a while. We've known each other a long time. I met her when I was very young. We were passionate til my early twenties, then separated with tremendous acrimony. Recently, for reasons I can only associate with nostalgia; a condition I find ridiculous and unneccesary, I have decided to let her back into my life. Baseball and I are together. 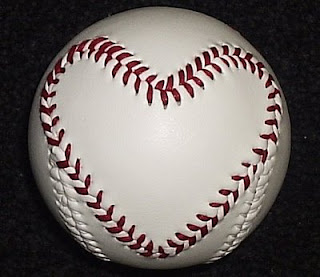 Baseball and I have matured. I am not curled up in bed with boxscores and statistics like before. I am anxious to see what happened in the games of the previous night. I find myself caring about what the pitching rotation is for my favorite team, the hometown Atlanta Braves. Losses don't depress me and wins don't exhilarate but I am enthralled with watching the game again.

I credit Kurt Cobain with getting us back together. The baseball strike of August 1994 followed Kurt's suicide in April. In my weirdly wired brain of music and sports, I saw the two connected. Figuring out what Kurt's death and what it meant to me, here: The Lesson Of Kurt Cobain , also opened my mind as to why I left baseball.

When control freaks lose control, they lash out. When I lost my rock star and my game in a span of four months, I got angry. If I could resolve why idolizing a musician was so important then but not so now and how I made sense of it, then how could I not get over millionaire ballplayers and billionaire owners shutting baseball down? I won't touch steroids and their impact on keeping baseball at arms reach for so many seasons. That's like me being mad at Kurt for doing a lot of smack.

Yesterday I went to Coolray Stadium, the home of the Gwinnett Braves, the Triple A minor league affiliate of the Atlanta Braves. The park is a few minutes from my house. 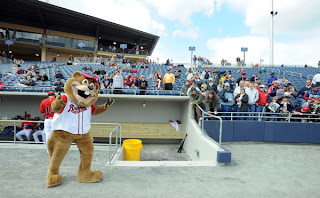 My wife works for an animal clinic nearby and the promotion of the day for the G-Braves was Bring Your Dog To The Park. We left Buddy the golden retriever at home because my 15 year old daughter wanted to take her friend who is a boy and thus, a 175 lb kid took up the space for a 95 lb dog. Bobina's animal clinic had free tickets and a booth set up for people to show off their dogs for a tricks contest with prizes. I'm glad Buddy didn't go because his "hey I'm lazy, watch me lay here and be cute business" wouldn't have won first prize. Buddy would've been devastated by the loss. Walking the stadium with the girls and sitting in the seats watching a few innings, I became reformed. The feeling of comfort and goodness was back. I had been to dozens of baseball games since 1994, all at major league parks, but for whatever reason, I always felt awkward and nonplussed. Yesterday, I felt home. Maybe it was the hot dog, which was impressive.

Baseball is just a game. It's beautiful in it's simplicity and artistic in it's pace. Being outside in great weather, smelling dogs, both hot and furry, along with the sound of the wooden bat cracking against the hardball felt natural. It's ok to use that word, natural, because minor league players are tested regularly. It may have been minor league, but my kids thought Joe Mather looked like Chipper Jones. I need to head back downtown to the big league park and get back into it all. I won't be debating All Star game snubs or breaking down the bullpens of the National League East like I did twenty years ago, but I will enjoy baseball. It's made me happy for the last couple of weeks. The big league Braves are 4-6 after dropping two of three to the hated Phillies over the weekend. I'm booing our centerfielder, the hapless Nate McLouth, and admiring our left fielder, the mercurial Martin Prado. It's all good again. If I could just talk one of the Atlanta Braves players into having a Nirvana song as their walk up, then everything will be perfect.

Today's song, is one that I'd nominate for Martin Prado or any other player who'd volunteer. Nature and apparently me, are indeed a whore. Here's Nirvana's In Bloom. Play ball.