Charles Dickens would have written a heck of a book about this weekend. It is indeed, the best of times, it is the worst of times. When  Bobina and I married, just six months after meeting, we would wa nt to move in a year or two. At the end of year two we have decided to move. The bottom line is, we have decided to find a new place to live as soon as we can.

The trip mto the corn maze was a great time. When we got there, my mother in law, MiMi, came up with a fine idea. We would split up into teams of two, and Amazing Race like, run around to each checkpoint, then find a winning team at the end. Bug and I started sprinting and we did well for a while, then I started arguing with a 7 year old about right hand turns, and hilarity ensued. We actually finished last. But, we had so much fun that by the time the story is told, say, 50 times, we won easily, and picked up million bucks. Anyway, we picked up a huge pumpkin and finished the night off with Halloween Happy Meals for the three little girls, aged 8, 7, and 6. 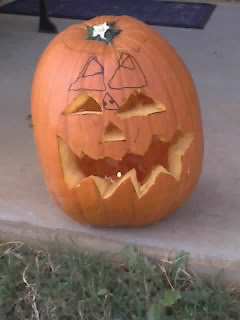 This is Spooky, our jack of lantern of the season. The design is by Bug and Goose. The carving is primarily my hands. 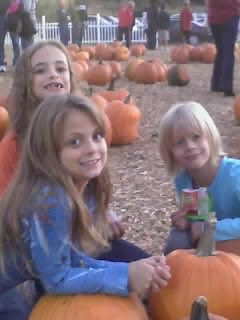 Belly, the 8 year old niece is in front, sweetheart Goose is to her left, age 6, the goofy girl in the back is Bug, age 7.

The spectre haunting our home is the ghost of Christmas future. By that holiday we will we elsewhere. The best choice is some townhouses near where our kids go to school. We also have a bead on a house near that area as well. It's a scary time around our place, but it's a good scare. A lot of our past, most of it not good, will be done away with. The idea of starting fresh and being able to do so for the holidays is exciting. I guess you can say we are living a pyschologically horror movie. This ghost doesn't stand a chance against my three daughters. Mwahahahahaha .....ha
Posted by Lance at Sunday, October 24, 2010