I want to make this blog post different. No literary attempt to sound intelligent to draw you into something. I don;t care about sentence structure or even coming across as a wannabe writer.

I LOVE THE NEW YORK JETS. I AM A MARK SANCHEZ FAN.

There, it's in front of everything else. So, three paragraphs later who can't say, dude I went to your twitter page, you're wearing a Jets t-shirt and half your tweets are about the Jets, you're a hypocrite with no credibility for your opinion. Wrong. I'll prove it.

Here's what we think we know. On New Year's Eve, the quarterback of the New York Jets went out. Sometime around 2am he met a blonde named Eliza Kruger, who was 17 and aquired entry into the club with a fake ID. Later in some sort of way, they had dinner at a sushi place, went back to Sanchez's home and, well, were intimate. Kruger posted pictures on her facebook page, allegedly of Sanchez's home. She bragged to friends and family that she had hooked up with Sanchez.

Here's what we do know. Eliza Kruger is the teenage daughter of wealthy financier Chip Kruger. He made over 50 million last year. Eliza brags to friends that her mom takes her clubbing and has been doing so since she was 15. She says she told Sanchez about her age, he replied that they could only be friends, she answers that 17 is legal in New York. Her family has gone public with her identity and their "side of the story". Now the internet is lit up like Christmas, and, as usual, over criticizing the wrong person. 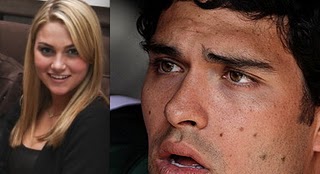 Let's really talk here. No moral outrage and save the righteous indignation. I'm a father. The oldest in my house is 15. To me, she seems like a baby. To others, I have heard she looks 18. They know to say this to her mother, not me, for the fear of me assaulting them. I have seen the high school juniors and seniors in my daughter's school, they look over 18. I fear for them and I am not their father.

Mark Sanchez is the quarterback of a multimillion dollar football team. He has hundreds of media outlets looking at him every day, including the God forsaken, cesspool of sports gossip, that "broke" this story, Deadspin.com. Mark should be more responsible, careful and discretionary. He's 24 years old and even though girls mature quicker than boys, the seven year age gap between he and this alleged encounter is enough for him to know better. I hope his father, mother, agent, best buddy, team owner, and head coach pull him to the side and say this GROW UP MARK, because this can't happen, ever. Then they should introduce him to their single female friends who are age 24 and over.

The girl in the center of this is a real piece of work. If I didn't live with 4 women, have so much respect for them, and value my personal friendships with other females, I would go off on Miss Eliza Kruger. The thing is, she really doesn't know better. Not at age 17 with a dad who is too busy making money to know that she is in a club at 2am on New Year Eve with a fake ID, getting picked up by a 24 year old. The mom, clubbing with her since age 15? Is she trying to overtake Dina Lohan, Lindsay's mom for monster mommy of the decade?

The story here isn't Mark Sanchez dating or getting together with a girl too young for him. The real story, being ignored by members of my own family and friend group on twitter and text, is the failure of these parents. All the money Chip Kruger can make will never pay for the damage caused to his daughter who has no boundaries, no moral compass, and no maturity. She was bragging about being intimate with Mark Sanchez over facebook. I start wanting to throw furniture around my house when my wife tells me my daughter's friend who is a boy tells her " I Love You" over their facebook pages. What must be going through the heads of the parents of this 17 year old girl. Oh wait, they have a lawyer in California and New York looking into legal action, possibly against Sanchez. I think the parents are looking to cover their rear ends and manhole cover the open spots in their bodies where their souls were taken to have their lifestyles.

There is a seven year age difference between my wife and I. I met her when I was 37 and she was 30 at a Chili's near the Mall of Georgia. We both had legal driver's licenses. As much as I love my wife, had I been 24 and she been 17, I wouldn't have given her the time of day. Then again, I'm a robot. I'm the only person who thinks the way I do, because that's how I'm programmed by creator(s).

Mark Sanchez is a good looking, successful, popular, single dude who, at age 24, isn't thinking the way he should be. At that age the only I had in common with him was being single. Now it's time for Mark to be smart. The next time he chooses to go out and approaches someone, he needs to ask for a valid ID, make sure the person the girl is with is not her misguided mother, and get a confidentiality agreement so that the relationship doesn't end up on my wife's timeline on Facebook next to her Farmville updates.

Todays song is too easy to explain. I don't feel good about playing or posting it, but the players in this story don't deserve cleverness or meaningful music. It's Kip Winger's old band, Winger. Just play your bass, Kip and get a girlfriend the proper age. I feel dirty.