Our Jeep blared Concrete Blonde's Everybody Knows as we arrived on the outskirts of  Langdon, North Dakota in a farming field. Their was at least at hour of day light left. My Langdon Cardinals t-shirt notwithstanding, neither Breann nor I blended with the Dakota locals. 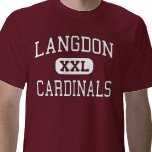 The late summer wind picked up and blew evenly over the field of yellow canola. Breann and I got out and looked across the first acre of grain. There stood out brothers and sisters. I began to walk the half a mile or so towards the four, Breann stood, like an oak tree, planted to guard the canola. Inexplicably, I walked back towards her and stood. The group of four, although meeting us for the first time, seemed in tune with the unspoken command to stand over the yellow field. 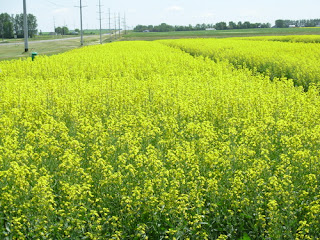 As the first of the four arrived at our station a few feet away from the car, I hugged Bruce and Leann. Then Breann spoked. "Look out at that abudant, perfectly placed crop. Was that where each of us were born?" We all shrugged our shoulders and began to make small talk. Breann grabbed my arm, whispered in my ear "Caleb, break open a couple of the canola plants and show them what we're here for." I cut the top off the furst one near me, split the root, and saw what Breann was talking about. Small, metallic particles gathered in the middle of my hand. Lucas, the landscaper among us and greenest of our 12 thumbs couldn't contain himself, "Holy Christ, these plants are bio-engineered." Lena added, "so. I'm guessing those metal pieces are part of what makes our hearts, nervous systems, and brains work." No one wanted to answer that question. We had above board, everyone knows about grand experimental fake food. Now if was time to find the guys who created this field of faux eats and figure out why the six of us are beyond normal and how long til our warranties ran out.

Breann, Lena, and I followed the rest to a National Park about 10 miles away. I noticed Bruce, technically the oldest of our group by 10 days, was moving slowly, even sickly. I heard him tell Lucas, his closest friend of our unique group, that he "might not make it home". Breann's investigative journalist skills picked up Bruce's weakness and started the think circle with the idea of describing any symptoms and other personal medical  information. Bruce was born September 1st, Lucas the next day, Lena's birthday was September 4th, while her scrapbooking buddy Leann was born almost 2 days later. That left me at September 10th, and Breann 8 hours later, on the 11th. With all of us facing our 41st birthdays between the next 6 and 16 days. It was desperation to find our creators, I should say doctors; or we'll all expire. Not die. Not pass away, but expire. Bruce, a rough and tumble hunter who had shot big game all over Montana, parts of Canada. and Colorado, produced a Bowie knife. "Bruce, this isn't necessary, we can get the not so good Doctors to do this."  Bruce was convinced he was close to dead. That Bowie knife belonged to him, so did his destiny. He held it over a cigarette lighter, then inserted under his rib cage near his heart. Lucas, seeing that Bruce was struggling with finding metal, assisted in the impromptu surgery and they ticked a metal lining near the heart. Breann, knew her role, she took a picture of the incision. Luann, a nurse at a Veternarian Clinic, found stables and gauze and cleaned the wound, then closed it up. Bruce was green with pain and illness.

"We have our evidence, our test subjects, now we need to confront these scumbags," Lucas stated. No one responded. We just checked on Bruce. Then I called my family. "Hey baby, we're in North Dakota cuttin' up." My wife wasn't getting the bad joke. "I have to go, I'll call you soon". Then, Breann pulled me to the side, and said "Bruce is going to die. He knows it too. Say what you want about how crazy this is, robots know there bodies." I was trying to find a silver lining, next to the metal lining of the six of our robotic hearts; "Let's send Bruce home, and let his family see his final days. If we can save him long distancely, sweet, if not, at least he dies with his wife and his kids."  I walked over to my brother in metal arms, and convinced him to get the heck out of Langdon, North Dakota.


*blogger's note* This is an excerpt from a book I'm writing. The good people at Studio30plus issued a one word prompt - CONCRETE. This is my contribution,