The last five years of my life have been a blur. I know I should have done things differently, but stubborness and pride got the best of me. So I finally manned up, drove to the store, dropped six bucks, and got some glasses. My eyes are not only brown, they're failing. They have been for 10 years. I went to the eye doctor 7 years earlier, had an exam, and got some prescription frames. Those lasted a while, then I got stupid, didn;t wear them for a while because I thought I didn't need to, and my eyesight got worse, making those glasses obsolete. In the meantime, driving, reading, living all worsened. It was time to drop the "holy crap, I'm old if I wear glasses" neuroses and see clearly, literally and figuratively. 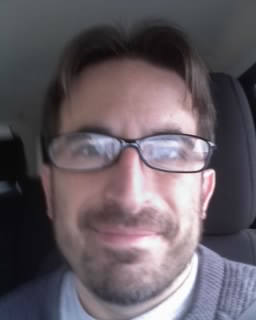 I am the owner and wearer of 1.50 rectangular blue framed reading glasses. They also help me write this blog, and see when I drive. I can actually read a street sign, tell you what my daughter's high school sign and wife's work sign says, and not guess as to whether the road lines are dotted or full.

I posted a couple of pictures on the twitter and got comparisons to one of the greatest singer/songwriters of the past two generations, the great Elvis Costello 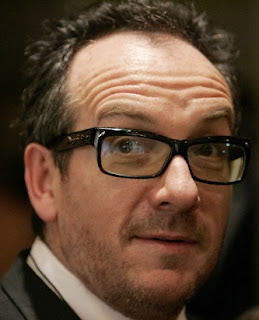 and Ted Allen, formerly of Queer Eye for the Straight guy, and now the Food Network guru on wine, food, and style. 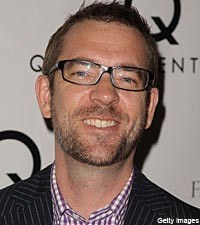 I'm unfamiliar with Ted Allen's work, but he wears nice suits, knows a lot about stuff I'm clueless on and seems to be a well respected fellow. The Elvis Costello comparison has gone completely to my head. I'm running with it. The Prince of Sardonic Wit and composer literate pop, rock, and jazz music is one of my artistic heroes.
This is me. I can write well, sometimes; I've  maintained gamefull employment with good company for over 7 years, I'm a killer on a charcoal grill, my kids think I'm not half bad, and my wife lets my key work at our house. Take that Ted and Elvis.

This is actually a bigger deal than the surface would indicate. I don't go to doctor unless something's broken in three places, I only apologize when sleeping on the couch is proposed or kids are openly weeping, and I don't take to aging, at all. Six dollars coming off the hip of the robot-human hybrid who thinks he's ok no matter how blurry life looks might as well been six million to the rest of you. Now I just have to keep these glasses out of the hands of my kids. These things break or get lost and I'll drive off a cliff seeing triple rather than get more. You read that right.
Today's song is from one of my hometown bands, Atlanta, Georgia's very own Black Crowes. I saw them perform this song almost twenty years ago, March, 1991. Lead singer Chris Robinson poured so much blood, sweat, tears, heart, and soul into the vocal. It's about heartbreak and realizing what you need to do to solve a problem. It serves, not only, as a song title companion to this post, but also as a metaphor for my intentional neglect of my sight. Turn up the sound, let Rich Robinson's guitar take you away, and may the southern fried rock and roll lead your Friday. I give you my glasses, and The Black Crowes' Seeing Things For The First Time;