I have a secret to share. The blog posts that show up here are never the ones I start or plan to write. That sounds like I am saying I have no idea what I'm doing. The secret is, I don't. Yesterday, I had this delusion of grandeur. I would take my two youngest daughters to Atlanta Falcons training camp, scout talent the local team had, write this well informed, first hand account of what to expect from a contending NFL franchise for the 2010 season. Sometimes my ego is pathetic. By the time I delivered nose spray to my allegry impaired wife, tracked down my missing driver's license, got drinks and snack together, it was almost 9am. Falcons practice started at 8:30am. As me, Bug, and Goose walked into the Flowery Branch traning facility at 8:45am the girls saw ice cream, hand fans, Freddie the Falcon mascot, and temporary tattoos. Breaking down the Falcons defense, and seeing if wide receiver Harry Douglas' surgically repaired knee was going to be counted on for 16 NFL games was reprioritized. 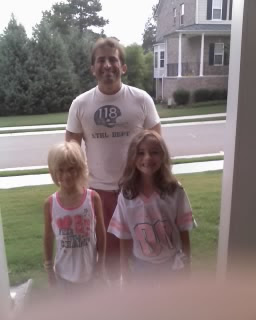 Goose picked out a cheerleader tattoo, Bug went for megaphone ink, and I stepped away from the tattoo stand. The best professional football writer in the business, Peter King, almost knocked me over. I had no choice. I had to introduce myself, tell him I admired his work and enjoyed him on twitter. He smiled, acknowlegded my kids, and shook my hand. At least I got something sports related out of this trip. As we made our way over to the bank where people spread blankets out to watch practice, the questions started flying from the girls, "so, this is all we do?" "when do they play real football, daddy?" "why didn't we bring a football so we could play?" "how long are we going to be here?".  I dodged the inevitable. Checked out some of the important players. Running back Micheal Turner look to be in excellent shape. Backup QB Chris Redman was the only guy throwing crisp passes. Rookie linebacker Sean Weatherspoon is lightning fast. "Can we go back soon and just go to the pool?" That final question was enough. 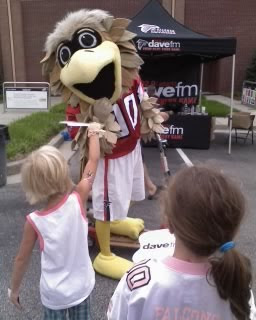 I thought the entire idea was a failure. The girls seemed bored, hot, tired, and I had no blog to write. After waking back to the car and riding back down Buford Highway for several minutes in silence, Goose pipes in "so, can we come back again and just bring our own football and a blanket. I think that would be better next time." Bug jumps into the conversation; "Daddy, we like football too. Let's go back next week and watch you watch them play practice or whatever." Then I realized I had something.

As Goose getting into her other dad's car later in the morning to leave for a couple of days, I heard her tell him, "we got tattoos, we got to play with the Freddie Bird guy, and watch the basketball players throw footballs." 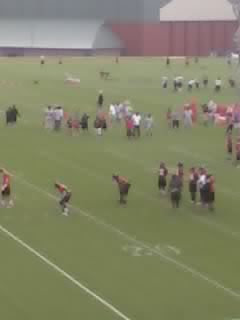 The Falcons have better personnel this year. They are in a tough division with the defending Super Bowl Champion, New Orleans. Atlanta is loaded in offense and their schedule is favorable. It's impossible to tell what players will do when they are in helmets, shorts, and no pads. I do know I had a heck of time.
Posted by Lance at Saturday, July 31, 2010