Rarely does someone die when you can say as much good about them as bad and still regard them as great. George Steinbrenner had a heart attack this morning. The owner of the New York Yankees turned 80 years old 9 days ago. Today he is gone. George Steinbrenner was mean, generous, loud, abrasive, kind, unique, impatient, caring, willful, obnoxious, bullying, felonious, pardoned, wistful, funny, hard, insensitive, loyal, weird, old fashioned, a visionary, brilliant, dumb, successful and a winner. He led a full, amazing life. 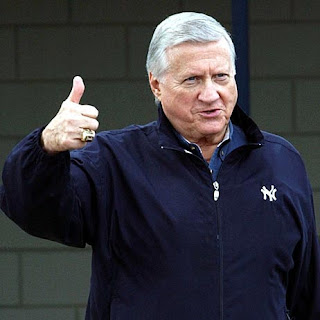 Steinbrenner was born 80 years ago in Rocky River, Ohio, near Lake Erie and Cleveland, to a wealthy ship freighting family. He graduated with a B.A. from Williams College in Massachusetts in 1952. His favorite sport was football, where he was an accomplished running back. After a stint in the Air Force, he went to Ohio State for graduate studies and was a student coach for the legendary Woody Hayes and the Ohio State football team. After getting married he was an assistant football coach at both Northwestern and Purdue in the late 1950s. During this time he joined his father's business and helped revitalize a failing Great Lakes shipping company.
Steinbrenner combined his business acumen, large dreams, and passion for sports early in his professional life. In 1960 he purchased the struggling basketball team Cleveland Pipers of the ABL. The league folded in 1962, yet Steinbrenner paid off all creditors, and made a name for himself in the pro sports business. During this time he saw his shipping business flourish and he used his money to finance Broadway plays, thus connecting him to New York and the social scene in the area.
CBS had owned the Yankees since 1965 and the team had lost stars and never recovered from those losses. By the early 1970s the Yankees, once the class of baseball with 20 championships, were moribund and not profitable. Against the wishes and advice of everyone he knew, Steinbrenner bought the Yankees for 8.8 million dollars. Steinbrenner saw Charlie O. Finley and his Oakland Athletics teams dominated baseball in the early 70s. They won 3 consecutive World Series with flamboyant uniforms, style, and outrageous characters for players. Steinbrenner's first move was attempting to buy the Athletics manager Dick Williams. It failed (Williams was still under contract with Oakland). During this time Steinbrenner was indicted on 14 criminal counts. In 1974 Steinbrenner pleaded guilty to making illegal campaign contributions to Richard Nixon and obstruction of justice. Steinbrenner's hubris got him suspended from baseball for fiftteen months while he paid the US government $35,000. He returned to the Yankees in 1976.
By the mid 70s, baseball had entered an era of free agency; allowing players to change teams once their contracts were completed with their previous clubs. Steinbrenner used his money and the Yankees' appeal to cash in. He gave record contracts to stars such as Reggie Jackson and Jim "Catfish" Hunter. By 1977, the Yankees were World Champions again, powered by Jackson's three home runs in three at bats in a world series game. They repeated as champions in 1978. I used to watch those teams with my dad and we'd say to each other "I wish that guy owned the Braves." 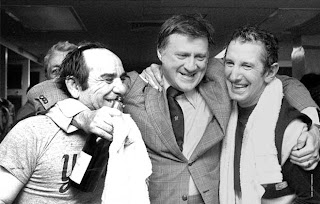 Steinbrenner legacy with the Yankees covered the gambit of innovation - he was the first owner to sell tv cable rights (MSG Network) - to pettiness - he demanded players have strict grooming habits, even beching players like Don Mattingly for having inappropriate facial hair - to criminal - he hired lowlife Howie Spira to dig up dirt on star player Dave Winfield and Steinbrenner was banned for life (he came back two years later) - to enviable, determined, win at all costs without apology attitude. he hired and fired legendary Yankee player and manager Billy Martin five times. He gave opportunities to drug suspended players Steve Howe, dale Berra, Dwight Gooden, and Darrel Strawberry to improve their lives and careers when no one else would. he showered his players praise, ridicule, money, abuse, and fame. Stories abound of his generosity. Fay Vincent, the man who banned Steinbrenner for life, former baseball commissioner went to college with Steinbrenner. The longtime football coach of Williams college became stricken ill, and Steinbrenner called Vincent (post banning) and asked if they could together help the coach and his wife until their deaths financially. Steinbrenner later retired to Tampa, Florida and stories of his charitable donations to the area are abundant.
George Steinbrenner patterned a public perception as a General George S. Patton (his hero), for he felt fear, intimidation, and authority would demand respect. That didnt' always work. In his later years he saw the kinder, gentler public profiles of his star players like Derek Jeter, Paul ONeill, David Cone, Mariano Rivera, and Jorge Posada, positioned with the the fatherly manager Joe Torre, make the Yankees new fans worldwide. Steinbrenner acknowleged these men had softened him a bit. His sons Hal and Hank Steinbrenner run the Yankees now. The team is coming off a 40th American League Pennant and 27th World Series title (7 in the Steinbrenner ownership era). The Yankees are worth over a billion dollars.
Few men live lives like George Steinbrenner. Few men can honestly say they were great. Goodbye George Steinbrenner. You will be missed.