I think I made God angry today. He said rest on the sabbath. I got up 2 & 1/2 hours early; 5:01am, got my wife, kids and dog up, drove us to the Doraville Marta station, hopped a train to Lenox Square and ran 6.2 miles. I did not do any of this for money. I am not qualified for that. Some Canadian dude is. He completed the 6.2 road race in a touch over 18 minutes and picked up a check. I got a t-shirt, which I gave to my kids. So, why would I take up a morning of perfect sunshine to just run? I accomplished something.

Eleven years ago, I was 35 pounds heavier, coming off "a cardiac event"; both physically and mentally I was miserable. After a couple of years of better eating and a lot of working out, I tried to think of something that would test my body, and award the hard work. I decided to try my hand at a July 4th tradition in Atlanta, Georgia, the Peachtree Road Race. The Race is a 6.2 mile run starting from Lenox Square and finishing at Piedmont Park. This year 55 thousand people ran the course. That's the equivalent of a Georgia Tech football game crowd.

This year my motivation was different. I have been in good shape for seven years. Yet, I turn 40 years old this September and I wondered if my body could handle something competitive. I am not handling turning 40 well. I will write a lot more about the ominous calendar day, so you have been warned. I wanted to accomplish something, like a positive check in the you're not as old as people think column.

After getting off the train, I followed the herd of fellow runners. The running groups were lettered A through X. I'm sure the Canadian dude and his 18 minute showoff sprint was in a special group marked "jerks". I didn't see them. As I walked down Peachtree and headed to ward Lenox, I'm pretty sure I was walking longer than I was actually running later. The race folks did a good job with signs and volunteers, I knew where to go. My group was letter X. The last group. As in, you are in the group that won;t be picking up a check or running anything in 18 minutes. I saw a lot of people. People from every race, creed, national origin. I saw kids as young as 10 (the youngest age that could run the race), men and women as old as 80. I saw people in costumes. Uncle Sam, Lady Liberty, and Yankee Doodle Dandy were donned by dozens of people, with sneakers on their feet finishing off their hey look at my patriotism. I saw a woman dressed as Marilyn Monroe and her significant other was dressed as Joe Dimaggio, circa 1950s NewYork Yankees baseball uniform. Their sneakers looked even sillier. I saw lots of tattoos. Some were awesome. Some were sad. Some were just bad. I felt very secure with my six tattoos, two of which were visible as I decided on a black sleeveless workout shirt. Yes, black; I'm not almost smart.

My family went with me. They took their train to Piedmont Park. While they waited for me at the finish line, the kids got free ice cream, trinkets, and bottles of juice. The race folks had hospitality areas that meant my wife, kids, sister in law and niece were able to drink, play, and snack free of charge, I was so happy they had a good time.

My X group had to wait til 8:58am to start. For the record, my favorite X-Man is Wolverine, my least favorite Peachtree Road Race to start is X, I hope I don't get that one again. As I waited, I people watched, downed free water, listened to my ipod, tweeted (at one point a woman saw me tweeting and started tweeting about me tweeting. Pretty sure that's the 5th horseman of the apocalypse), and started realizing that my vanity and self esteem boost wasn't the main reason for running the 'Tree. I was having fun. 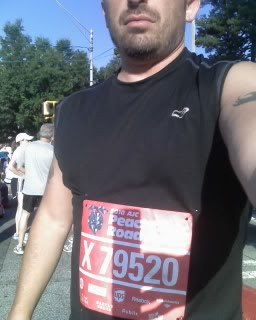 The gun sounded, and my group started running. In previous racing, I had bolted like a sprinter and given out halfway through the run. This time I was more economical in my energy. I started running next to a dad with his 10 year old son. The kid was smoking us. I just enjoyed his enthusiasm and looked for a water stand. As, The Sex Pistols gave way to Foo Fighters gave way to Notorious B.I.G. gave way to Counting Crows in my earbuds I watched older people smile and winch through their day of holding off old age. I watched young children bound with unchecked energy as they saw their whole lives ahead of them. I watched dudes like me, feeling good on a day of liberty. Mile 4 happened quicker than I thought. I had my phone on me and used it to keep time. I crossed the mile 4 marker at 43 minutes. Better than I had expected. I could do this thing in a touch over an hour. I got my tail kicked by cardiac hill downtown, ran into a 12 year old girl getting water, exchanged high fives with a two year old boy somewhere around Peachtree Road. I had some energy in reserve as I reached mile 5 and texted my wife. Finally I hit mile 6. This deal was about done. I downed one last cup of water, made me way to the middle of the road and jogged heartily pass people much younger than me. I saw the finish line past Piedmont Way. I did a Jersey Shore fist pump and looked at my time, 1 hour 6minutes 26 seconds, I was satisfied. I wasn't in an ambulance, my body was tired not beaten, and I had some of the most fun I could ever have wearing tennis shoes.

My mother would later ask me why I was giving my t-shirt away to my teenaged daughter. My response was "because she asked for it". The truth is, I didn't care about the shirt. I ran this thing for the fun of it and if I could make my kid happy along with her sisters and her mom, mission accomplished. After picking up the shirt and a bottle of water, my legs began to cramp. Pain filled my calves, quadriceps and hips. I smiled through it and hugged my kids and kissed my wife. It had been a good run, and a good day. It was only 10:06 a.m. 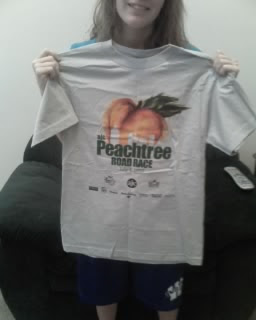