It's official. LeBron James, Dwyane Wade, and Chris Bosh, further known as LeWaBo, have joined the NBA's Miami Heat as free agent changing the player landscape of the Eastern Conference and likely changing the way players approach and use free agency. 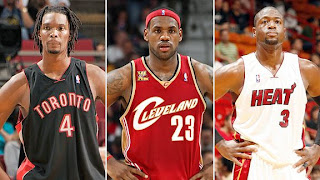 I know so many of you are sick of the entire story and the media cesspool it has created but I have a few thoughts to put my interest in the Situation (fistpump) and then I will rest.
1) LeBron James has talked about his brand so much I expect him to turn into a hologram and float over my house in a blimp when his name comes up. He views himself as a businessman. Well, for once, he looked at himself as a basketball player and decided that winning was more inportant than making money and achieving fame. He will be making less money in Miami so that he can co-exist with Wade and Bosh. They will share the wealth, the fame, and status. James deserves applause for that. We ask athletes to be about winning, not money. Now a dude does that and we hate on him.
2) LeBron James deserves scorn and loss of respect for leading Cleveland to believe he was staying. he is from Akron, Ohio. He has spent his seven year career increasing the profile of Cleveland. They do deserve respect. He showed them little by conducting a dog and pony show for the last month. I believe James was going to Miami all along, so making the Clippers, Knicks, Nets, Bulls, and Cavaliers think otherwise shows James to be dishonest and immature. Even if James was considering returning to Cleveland, using a one hour special on ESPN last night was the wrong way to go about his business.
3) The Heat's President, Hall of Fame caliber coach and player, Pat Riley, deserves to executive of the year award for using his best player (Dwyane Wade) as a consigliare to snare Bosh and James. The Heat just traded away Micheal Beasley to the Timberwolves to clear cap (money) room. They signed pure shooter Mike Miller. They likely will keep rebounder Udonis Haslem (a good player). The Heat will be a very good team, even this year.
4) Cleveland Cavaliers owner Dan Gilbert is a classless, unprofessional, dishonest jerk. His childish reaction to LeBron James' decision; calling James a quitter a quitter, a coward and some other words. So, what future free agent would want to sign with Gilbert's team? Gilbert twice wanted to sign this "coward" and "quitter" to a hundred million dollar contract. See the dishonesty? Gilbert's Hamlet act just doesn't work.
5) The real reason people are angry or put off is the players had the power. I stole this analysis from sports commentator Dan Le Batard, who lives Miami. Usually the owners have the power. For two months LeBron James, Dwyane Wade, and Chris Bosh made very rich, successful men look like buffoons. During the 2008 Beijing Olympics, these three athletes put together a plan and executed it. Cleveland, Los Angeles, New York, Chicago and New Jersey feel like they were tricked by a bunch of spoiled, egotistical basketball players. They were.
Ok, I'm done with this.
Posted by Lance at Friday, July 09, 2010