Just when I think I am going soft and enjoying my family's pop music and reality shows too much, something happens to bring my snob back. I just finished watching the movie about 1970s all-girl rock and roll band The Runaways. 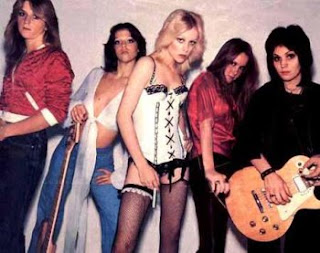 For the uniniated and the unaware, The Runaways were one of the first hard rock groups formed with female members on the Sunset Strip in Los Angeles in 1975. The lineup featured rock legends Joan Jett on rythym guitar and vocals, Lita Ford on lead guitar (yeah, she's legendary, I said so), along with Cherie Currie as lead singer, drummer Sandu West and a revolving door of bassists including future Bangles member Micheal Steele.
The Runaways are a little overrated in the influence department, I believe, because more successful acts, like The Go Gos and The Bangles took the pop route. Jett and Ford found fame as solo acts. They're underrated musically. Cherry Bomb, Rock n Roll, and Queens of Noise are solid rock anthems. While Black Leather, Neon Angels, Hollywood and Dead End Justice are really good songs that are largely ignored except by musics geeks like me and musicans.
The movie is pretty much Cherie Currie and Joan Jett's version of The Runaways. Jett executive produced the thing and she doesn't get along with Lita Ford or any of the former base players and barely tolerates Sandi West. While Currie's biography anf her close friendship with Jett were the blueprint for the screenplay. As a result, while you get Jett and Currie's background, drug and sex antics and other life details, it glosses over their musical and other artistic dealings with the other members and their ex manager, the flamboyant Kim Fowley. Kristen Stewart, of the those Twilight movies, plays Jett. She gives the role the authenticity it needs. She looks like Joan, plays like Joan, and even sings like Joan. Dakota Fanning tries to conjure Cherie Currie, and fails. Currie had an underrated style and presence. Fanning is so dull, she sucks the life out of her role. Micheal Shannon is so over the top as Fowley that he's perfect. To this day, Fowley stalks the Sunset Strip carrying a cane with green hair, tyring to find the next big thing. Shannon captures Fowley well. The other roles are wallpaper. Sandi West and Lita Ford were major cogs in the Runaways machine. The lack of depth of their charaters is criminal. The Runaways were anarchic, wild, bad girls who did more than just booze and drug. they wrote a lot, played a lot, and tried really hard to be different. You get none of that in this movie. 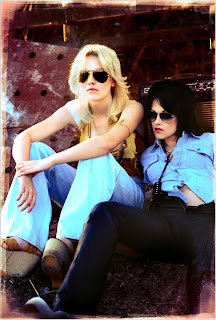 The soundtrack is very good. The Stooges, David Bowie, Gary Glitter, The Sex Pistols, MC5 and Suzi Quatro (Joan Jett's musical mother) are all featured appropriately. Everyone looks the part (except Fanning) but things aren't just good enough.
As good as Sid and Nancy was as a movie, the documentary The Filth and the Fury about the Sex Pistols is better. It seems every time someone tries to tell a band's story, telling the real story with the real people works better.
That being said, I'm listening to The Runaways first album right now. It sounds great. Can't wait to return the movie to redbox. 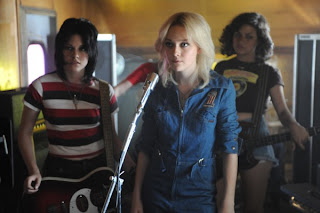