When I was a kid I wanted to be one of three things, quarterback of the New York Jets, centerfielder for the Atlanta Braves or Diamond David Lee Roth. Firemen, cowboys, cops, or astronauts did nothing for me. Athletes and rockstars seem to have it all. I grew older and realized 5'8" and somewhere around 165 lbs was where i was going to hang, and thus the athletics dreams died slowly on some obscure football field and/or baseball field in suburban Georgia. My interest in music greatened, my talent did not. As I pursued a degree in communications at the University of Alabama, I worked in television and radio as a reporter and producer. This brought me in contact with policians, athletes, news anchors, sports media types, and musicians. I learned something about myself by rubbing their elbows, celebrities are friggin weird. I'm crazy enough without having to be other-wordly insane. I found contentment in being a nobody.

James Franco is a somebody. I first saw him in the television show Freaks and Geeks. He seemed to have "it". He stood out among a good cast. Then I liked him as James Dean. He embodied the role and you felt like you knew something about a guy who died in 1955. Next came little seen and, im my opinion, very good films, Sonny and City by the Sea. Franco shined in both. I thought I was forming my own fan club of a dude who could really act, not just "star". Then came the Spiderman movies where he played Harry Osborn. He was good, not great. Probably wanting to be taken seriously as an actor, he made some stuff no one saw. He disappeared for a while. Made a couple of bad movies, then started popping up in supporting roles. The word on the "celebrity street" was, James Franco was different, out there, not your garden variety leading man. There was something cool and underground about him. I saw an Inside the Actor's Studio last year with Franco and that artsy, hipster, acting crowd worshiped him. Like Bob Dylan playing Greenwich Village in 1965 or Barack Obama speaking at a Chicago community center in 2008. Sunday night James Franco became something he probably doesn't want to be, a typical celebrity. Right there with Charlie Sheen and Kim Kardashian. 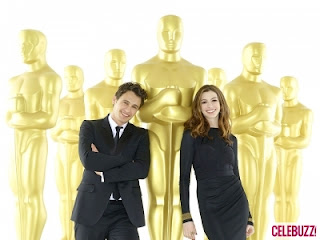 He co-hosted the 83rd Academy Awards. His reviews were bad. Social media and the online world skewered him.

Criticism is itself an art form. I disagree with those who say critics offer nothing. They do. The blank canvas to which artists paint has to be judged. Otherwise, there's no point is painting, acting, singing, writing.One of my writing idols is the late music writer Lester Bangs. I challenge anyone to look up Bangs, read his stuff, and tell me he wasn't worthy of artistic merit.

I take a knife, slice open my gut, and offer you, blog readers, myself almost every day. I've been fortunate. Being a nobody, somebody or I guess I should clarify, anyone has harshly critiqued me. I've been turned down by a blogging site. Looks like it's about to happen again. But, if I were as handsome (i don't see it, but then, I'm a dude), successful, and famous as James Franco, I bet this blog would have some hardcore haters.

Franco has a degree from UCLA. 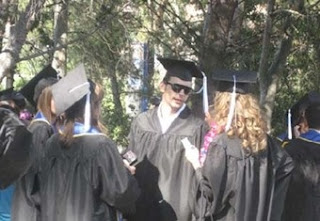 Despite being 32 years old, Franco is now a doctorate student at Yale University. That in itself, is an accomplishment that I can't imagine. A fellow student at Yale, Cokey Cohen (as far as I know that's her real name), writes for the Yale school newspaper (yes, they still have those), the Yale Daily News. Saturday, before Franco's universally panned  Oscars show gig, Cohen decided to take a different avenue to take James Franco, to task. http://www.yaledailynews.com/news/2011/feb/26/franco-getittogether/
James Franco's twitter account = @jamesfranco

How you respond to negative feedback is what really matters. I fail at this a lot. Sometimes, smiling, saying thank you, or I'm sorry, or wow, that's a salient point, disarms people and suddenly they're on the retreat and you find common ground. I wish I was better at this. Celebrities are terrible at it. They have egos. Those egos are stroked, pampered, and coiffed. They get a lot of attention, most of which, they probably don't deserve. I don't do well with compliments. I want them. But, the way I'm programmed, I don't actually deal well. This is why I would suck as a somebody.

Sometime post bad Oscars job, Franco's first tweet was "F--- The Yale Daily News" in red photoshop ink over a picture of himself." I wouldn't take Franco to the carpet for this, because Cohen's article was kind of lame. But, James Franco the celebrity, spent time to use the ink and a picture of himself. That's premeditated overreaction. That's can't happen between a somebody and a nobody (Cohen). I don't have a problem with bad celebrity twitter accounts. For every Butch Walker or Ozzie Guillen or Rob Thomas, there's a lot of James Francos and Katy Perrys. They haven't embraced the social media form because either they don't have to or don't want to. Good for them and their swimming pools full of hundreds. What somebodies have to know, is nobodies are not the enemy. Age, bad scripts, poor album sales, awful management, drugs, and indifference are the armies they are battling. Not Cokey Cohen, who responded to Franco's blast with some candor and admirable snark;  http://www.yaledailynews.com/news/2011/mar/01/weekend-franco-wellplayedsir/ .

It is a fairytale land of blue skies and palomino ponies for me to assume I can teach James Franco anything. I feel confident I could counsel him on 70s punk bands, 80s hair metal guitarists, and the 90s grunge scene. I know a good bit about raising little girls. I could break down the New York Jets defensive schemes or the Atlanta Braves pitching rotation for him. Or, one more caveat, taking crap from people online or in the media. James, ignore it. or, better, use it to show humor, style, and grace. Post both of Cohen's articles on your twitter account. Track her down at the school cafeteria and buy her a coffee or tea or soda. Make her an extra in your next movie. Embrace truth, James Franco. Negative goes with positive, that's why they make battery cables.

Two more things James, get off General Hospital, that's slumming; and don't ever host the Academy Awards again. If David Letterman can't do it right, neither can you. Now, someone send this to his twitter account so he can tell me to go screw myself.


Today's song really doesn;t pertain to the post. I just want you all to listen to MAKE OUT!  a poppy punk band from New York that rocks. This song is I Don't Want Anyone Who Wants Me. It rocks. The 5 song EP is only $2.97 on itunes.