Our moment together was interrupted by the competing vibrations of our cell phones.We started walking away from the park as she spoke to her boss, and I took a call from my wife. "So, I'm being nosy. Tell me what happened, what's she like," Shane quizzed. Before I answered, I overheard Breann tell her New York Post editor caller, "I need some time off, at least a week. It's personal, and very important." I answered Shane, "she's like me but, female. She worries a lot. She talks too much. You'll probably love her, since you love me," Shane paused before responding, "I told you you were connected to her. When you get a moment alone, call me, and tell me everything, I love you forever." I smiled and said I love you back. Breann ended her call and acted as if everything was fine. "come on Caleb, let's go check out where we were born. That's a start." That was an understatement. We started telling the 40 years of our lives on the walk to Lenox Hill Hospital.

Hospitals are the same the same in New York as they are anywhere else in the world. They are a little busier, but equally as devoid of humanity. The woman "working" the information desk was not impressed with our inquiry about babies born 40 years ago. "Ma'am, could you just tell us how to look up the birth records so we can get information on our doctors?", i asked in the little southern charm I possessed. While she muttered something about going downstairs, I saw Breann staring at a nurse as though she knew her. The nurse, tall, in her sixties, with brown and gray hair, turned toward Breann, smiled sheepishly then walked away quickly, as if she had to go somewhere right then, in a major hurry. Breann started following her, and I said thank you to the information grump and kept pursuit. Breann reached the nurse as she was getting on the elevator but by the time I got there, the doors had closedl I frustratingly pounded the elevator door frame. "Buddy, those doors open every couple of minutes. Be mad about the Mets blowing that game in Atlanta to the Braves last night," said an older man with a Queens borough accent, who appeared to be a patient. He seemed quite congenial for native New Yorker so I just smiled and said "yeah, you're right." I didn't want to reveal I was from Georgia, and thus, a Braves fan.

I called, then texted Breann and got nothing. The elevators were old, dense, and thus probably oblivious to cell phone coverage. I called my wife and updated her on what was going on. I made my way to the basement records office and started playing private detective. Walking down the stairs, I felt a pain in my chest. It was similar to what I had felt 11 years earlier when I had a heart attack. The pain stayed and I began to feel feverish. The sickness angered me, as I just didn't need heart issues again, especially right now. A helpful clerk, who asked me four times if I was feeling alright, guided me to the 1970s record wall. I started flipping through August and September. Why did I have to be born in New York City? My parents were Georgians. My dad played minor league baseball for a year in the New York tri state area. How many babies could have been born on September 9, 1970 in an Atlanta hospital, 5, 10 at the most? For the record, 54 babies were born the same day I was in this ridiculously busy New York hospital. Breann's conspiracy was starting to make sense. Of the 54 babies born that day, there no still borns. That's just unusual. I was listed in the births, not the deaths. Although there was no doctor next to my name as far as attending physician. Either my mom did the work herself or I was so specifically heinous that no one wanted to put their name next to mine for credit? I reached into my pocket to get my phone. i was going to call my parents and gets some answers. They were always reticent to talk about my birth, like it was immaculate in a manger or something. My phone had no service. I was in the bowels of an old hospital. Santa Claus had better service at the North Pole than I did right then. I found Breann and the other four names. Their information was similar. No doctor listed, few details of the delivery, put down as births not stillborn and no information about the hospital stay. Were the 6 of us coincidentally victims of incompetent secretarial tasks , or was this how the doctors covered up their dubious work? I took some pictures of the records with my cell phone and went to find Breann or phone service.

As I walked upstairs into the main lobby I got service back and saw three texts from Breann, and a voicemail for an unidentified number. I checked the voicemail and heard "if you want to find what you're looking for, research the names Connor Bulas and Anson Cluber. Give up talking to anyone at the hospital. They either know nothing or have been silenced." The voice was genderless. It could have been an older woman or a middle aged man. It was deep, husky; obviously a smoker. That's the best I could decipher. Then I checked the texts and saw one that read "meet me outside, this hospital sucks." I walked into the front entrance of the hospital and saw Breann. She looked angry. Before I could tell her about the voicemail, she said "sorry I ran off. I recognized that battlel ax nurse. When I was here five years ago for migraine headaches, she worked my room. I remembered her saying something like "oh sweetie, you lived this long" or something like that. She thought I was sedated. She wouldn't talk to me, acted like I was stalker, and called security on me. Dumb old woman was more worried about smoking a cigarette." I was startled. "Did this woman have an ambiguously deep voice, like she could have sounded like a man on the phone?", I wondered to Breann. "Yeah, she was Bea Arthur but with less personality.," she answered. "Listen to this voice mail" I offered. Her eyes grew large and she played it again.  "I gave her both of our business cards. She must have called you while secruity guards were walking after me. What a jagoff that woman was." I laughed and assured her, "I took pictures on my cell phone, plus memorized some stuff I saw. I felt several pairs of eyes on me so I got what I could and went to find you,". Breann looked determined but resigned to certain facts. "Are you hungry? We both have expense accounts, let's use one. I know the perfect place." she reasoned.

We hailed a cab. I called my wife and told her what was happening. By the time I finished with Shane, we were in front of Serendipity 3 in Manhattan. The pain in my chest was still there, my fever was low grade at best. Breann was fighting headaches, I could see it on her face and her hands were constantly touching her temples. As she paid the cab driver, I looked around 60th street. This was the 8th time I had been in New York, it seemed like home everytime. Breann caught my wistfulness, she smiled, and said "why do you think I live in this town? Every other place in the country seems second rate. Then again, I'm not married with 3 kids like you. Let's get a good hot dog." I wanted to know more about her physical condition. I had heart problems and a social anxiety disorder. I knew she fought anxiety and migraine headaches. All of our ailments seemed related. If there was serendipity to be had out of our bizarre new relationship, it would be figuring out what was physically wrong Breann and I, plus the other 4, and getting healthy for the first time in many years even if we didn't answer the conspiracy questions. Maybe that's why she took me to this restaurant. 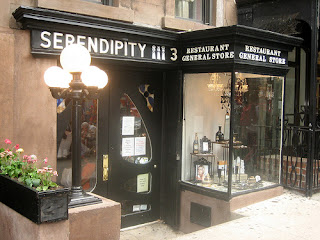 *blogger's note* This is not only my entry for @Studio30plus 's writing prompt SERENDIPITY but also a continuation of the story I'm writing. The other entries you might like to read to make sense of the writing here are

I'm going to serialize the story through 100 word challenges from http://www.velvetverbosity.com/ and the writing prompts of http://www.studiothirtyplus.com/

Hope you enjoy what I'm putting out there or well, here.

Today's song is from one of the best bands ever, KISS. After some reflective, deep thinking songs this week, I felt like rocking. Plus the New York vibe goes with this part of the story. take it away Ace Frehley, here's New York Groove....