The Movie Is Alright

In the early 1990s, a college dropout walks into a a fertility clinic. Motivated by a slight undercurrent of idealism and the 60 dollar per sample the clinic will pay, he donates sperm. Roughly 19 years later, an 18 year old girl, bound for college in a month, calls the man to tell him she and her 15 year old brother are his offspring and want to arrange a meeting. A generation ago, this premise would have precipitated a horror film or psychological drama where someone dies, a mystery is solved, or there's a gunfight. Last year, The Kids Are Alright took this setup and made a moving, meaningful, funny, poignant film about real family.

Annette Bening and Julianne Moore play Nic and Jules, a middle aged married lesbian couple living in Northern California with two teenage children. Mark Ruffalo portrays Paul, the now late thirtysomething retauranteur who donated sperm. The kids contact him, begin a relationship with him, and Paul becomes integrated in the lives of the entire family, including Nic and Jules. 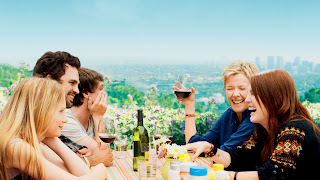 Most family movies are predictable. The family is traditional or "nuclear". The mom and dad are perfectly in love, have been so since childhood, and the 2.2 kids are well adjusted with little to no conflict. There's also anti-family movies where everyone is screwed up, hopelessly so. There's a specific fault, the parents are bad, there's a villain, or a scourge in their lives. The Kids Are Alright eschews any of this movie thinking. Nic is a hard working doctor who's kind of distant to her wife and strict with the kids but loves them. Jules is laid back, aimless at times, very hippie-ish, and thinks there's a good explanation for everything. The kids are kind of normal too. Joni, the 18 year old, makes good grades, has goofy friends, is very innocent around boys but doesn't want to be, and feels pressured to be the "good" kid. Lazer (yeah, that's his name), is athletic and aloof. He walks the bad boy line with a friend who is a terrible influence, but he eventually follows his parents teachings and does the right things. The kids find trouble but they're not trouble. The way The Kids Are Alright shows that there is more than one way to skin the cat of what a family looks like and loves like is so well done. 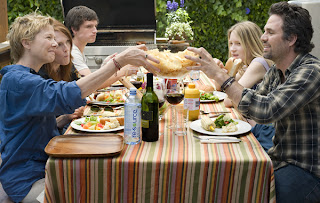 The acting is excellent. The kids are a little underdeveloped in the middle of the movie but they carry the beginning and the end. Paul, central to the conflict and story, is treated unfairly in the end. But the realization that real life is never fair, always complicated, and ultimately imperfect is what makes The Kids Are Alright so good.

As the head of a "blended" family where divorce, mixed parentage, and diffcult parenting are common themes, it was easy to identify with Jules, Nic, Joni, Lazer, and Paul. I recommend The Kids Are Alright because the movie never takes the road most traveled. It's unpredictable, unique, and real. It's almost like the writers and director made a reality movie but found the best the acting community has to offer to fill in for ordinary people.

This isn't to say The Kids Are Alright is a perfect film. It was nominated for an Academy Award despite being slow paced at times, mean spirited toward Nic and Paul, and way too understanding to an affair between two main characters. The real (I can't stop using that word) way that the film handles the flaws of the players is so impressive, you end up liking everyone, even though they make baffling choices.

My favorite scene is when, at Nic's encouraging, the aforementioned characters meet for dinner at Paul's house. Nic, who is initialing against her kids knowing Paul, bonds with him over their mutual admiration of singer Joni Mitchell. Nic and Jules named their daughter after the Canadian songwriter. Minutes before all hell breaks loose, Nic sings the Joni Mitchell song All I want at the dinner table. You get under her rough exterior that makes her completely unlikable up until that moment. Her vulnerablity happening before she makes a brutal discovery that shakes up the family is so well played by Annette Bening and Mark Ruffalo, it brings the film together.

As the father of a teenage daughter, the movie's ending made me tear slightly. I don't care if you think that's lame. Watch The Kids Are Alright. The acting alone is worth two hours of your time.