Spring means a lot of things. Baseball, the Easter Bunny, yardwork, and seeing people who shouldn't be wearing shorts at the local Walmart, wearing them. Excuse me if I place something ahead of those benchmarks of the second season. The Strokes are back. 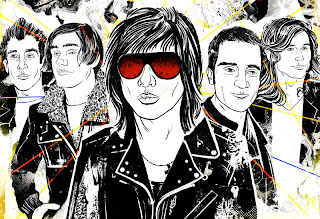 About ten years ago, rock music saw an influx of The The bands. Sweden had The Hives, Australia had The Vines, England had The Libertines, America had The Strokes. New York City's Fab Five of retro cool led by singer-songwriter Julian Casablancas, the son of fashion model mogul John Casablancas, sounded like The Velvet Underground had a baby with Television and Blondie at CBGBs and it wore sunglasses while swirling jangly guitars played. Their debut album, released a month after 9/11, Is This It, stayed in my CD player, both car and home, for months. Hard to Explain, Last Night, Someday and New York City Cops were songs I just couldn't stop listening to. The Strokes sounded different. They sounded like they were having a good time and didn't care if you liked them. They were cocky, pretentious, fun, interesting New York City artists that got it. Their second album, Room on Fire was even better. It flowed from one guitar driven hangover tune to another. Reptilia was one of the best songs I had heard in a long time. Then, instead of taking time off they made a bad record. First Impressions of Earth was released five years ago, and it was a drastic change. As much as I like it when bands experiment and try to be different, the electronic stuff, the overuse of synthesizers, and weird song structures just sucked. So they didn't talk to each other, everyone did solo projects, and everyone in the music world asked this question, "When are the Strokes coming back?"

Yesterday, The Strokes answered the question with a new CD release called Angles. It's a return to their retro post punk song but the lyrical content is more grown up. Julian and his wife had a baby a year ago. You can hear the wistfulness in the words of some of the songs I've heard. Nick Valensi's guitar work is excellent. I've heard five songs. I think my favorite so far is Under The Cover Of Darkness. I'll get the album downloaded from itunes onto my ipod by the weekend but my excitement for The Strokes being back is high. 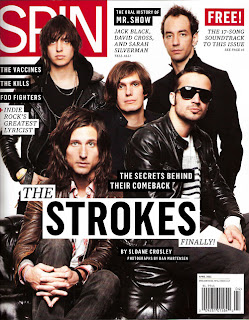 Today's song is from the new record, Angles by The Strokes. It's the only official video they have out, as far as I know. Listen to the guitar. The way the song builds at the 90 second mark is terrific. It's good to have good music to feel good about. Welcome back Strokes.