Shimmer in the Sand

I ran away from home for the first and only time when I was 36 years old. It was Thanksgiving, and I didn't feel thankful. I felt lost, resigned, and alone.

I packed two bags and wrote a goodbye letter. I left it on the kitchen counter of the house I rented from my family. I was hoping they would come by unexpectedly, without calling, find the note, and thus allow me to have an excuse for leaving my life.

Two months earlier, I sat in a courtroom and watched who I was, die. When the judge rendered her verdict, I left that person and wandered aimlessly, disconnected, for weeks.

Thanksgiving came quickly and I accepted an offer from a longtime friend, to meet in Key West and do as Ernest Hemingway did when he resided there; drink.

The day I left, my friend called and said he couldn't make the trip. The person I left in the courtroom would have unpacked his bags, felt sorry for his loneliness, and sulked until something ridiculous came along to distract him. The purgatoried me got in my car, and drove 13 hours.

I stopped at a gas station near the beach in Miami. While my car took fuel, I walked a hundred yards and stood in the middle of the shore and comtemplated staying there or even going back home. I realized what those choices would be a metaphor of and I kept going.

I made it to the Keys. The motel shanty I chose, for price, was pathetic looking. It was dingy and unkept. The screen door was broken. There was a grill outside on the tiniest patio you could imagine. The beach, though, was just 30 feet away.

Two days later, Thanksgiving came. I had grilled a steak medium rare, which was apropo for my zombie state. I ate while the waves rolled in and the sound calmed my anxiousness. By my third beer, I decided to walk the 30 feet and try the cold ocean water, despite the 55 degree temperature. Before I reached the tide, I noticed how warm the beach was, so I removed my shoes and socks. I sat down on the berm, and felt the texture of the tan grains. I had a beer in my left hand and I poured a tiny amount into the ground and then ran the pebbles over the wet spot. The symbolism made me smile for the first time in two months. I let go. 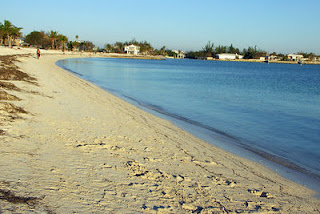 A little beer, a good steak, a cool breeze, and some warm sand changed me. I changed myself. I went home the next day and tore up that goodbye letter. I've never written another one.

I'll never forget that Thanksgiving. I became thankful for who I was, and who I am.

*blogger's note* - This is a writing exercise inspired by blogger friends at Sluiter Nation. The matriarch, Katie, has a writer's blog, called The Red Dress Club - http://thereddressclub.blogspot.com/ I, nor my wife, have a red dress, but I do have a sand memory. She asked for me to write about it.


Today's song is special to me. It was playing during when and on the day this memory occurred. The "she" in the song is what I call my conscience, my morality, my essence. She spoke to me a lot that day. Here's one of my favorite songs, Shimmer by Fuel...