I'm a comic book geek. I'm also a superhero dork. The glut of action films, specifically from Marvel Comics, is in my wheelhouse.

The disclaiming paragraph written, it's now imperative that I tell you non geeks and not so dorky why you should go see Thor, The Mighty God of Thunder, currently making an otherwordly amount of cash.

Kenneth Branugh, Emma Thompson's ex husband, the dude who was Hamlet, the arrogant teacher in Harry Potter, and the villain in Wild Wild West, directs the latest Marvel Comics property. He brings a lot of emotional heft and character depth to the project.

Thor is a comic book character taken from Germanic mythology. Wait, I'm losing you.
Thor is played by this guy: 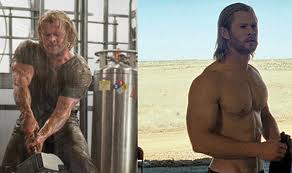 Chris Hemsworth, a 6'5" Australian who talks EXACTLY like Heath Ledger. His voice is uncanny to late actor. Hemsworth gives weight, both in physicality and acting ability. He is Thor. You get it.

You won't need to be as versed in the comic books as I. There's plenty of exposition to lead you through the Gods, realms, villains, supporting characters - great work by the females Jaime Alexander as Sif, 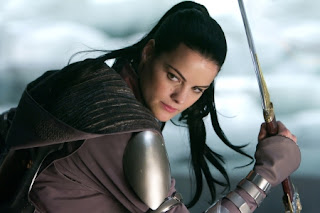 I am was pleasantly surprised by how it all worked. I saw it in 3D and usually, anything that gives me a headache, I bash. This, I gave a pass to. It's that good.

Oh, comic book nerds, I have this to tell you. There's a cameo by a Marvel comics character. He's played by The Hurt Locker's Jeremy Renner. It's a bow (all pun intended) to a future film. Then, stay around for the post credits scene where Samuel L. Jackson's Nick Fury shows up. The plot twist will make you happy.

The last good piece of news is also today's song. Foo Fighters contributed their new song, Walk. When Thor can't get the hammer out of the desert, Stellan Skaargard's doctor character, Erik Silvig, takes Thor to a bar for boilermakers, and Foo Fighter's provide the sound.