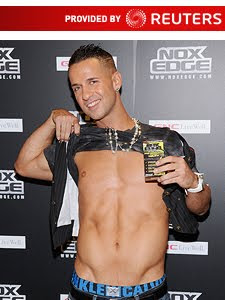 I was almost a household name. I was close to being a celebrity. I was on the verge of mass media notoriety. I coulda been a contenda. Yeah, I was nearly that guy, Mike "The Situation" Sorrentino^. I was almost famous.

Well, my abs never looked that good, not even when I was 22 years old. That's when I flirted with reality television. While attending the University of Alabama, and nearing graduation, I was approached by a communications school friend who was interning at MTV. She was recruiting people to try out for the second season of MTV's The Real World. I was working as a reporter and producer for radio and television in Tuscaloosa and Birmingham Alabama, while finishing my degree. I gave my number to the intern and two days later, a producer from MTV called. We did a 30 or so minute interview. It was casual. the questions were predictable and somewhat rediculous. I felt like I was either too normal or too crazy for the producer's vision. A few days later, I got another call. This was before cell phones, so I had several voicemails on my answering machine from another producer. This woman sounded more serious and I think she may have had an office and a bigger title. We talked for quite a while and she wanted to know if I wanted to come to New York City. I was scheduled to go there for an Associated Press convention and the timing matched her schedule. While I was in the City, I went over to the MTV studios, and led to a basement studio. For about two hours, three people talked to me in front of cameras. The cameras then followed us out to get lunch. I think the point was to see if having a someone watch me eat a turkey sandwich would make me nervous. It did, but I acted like I was cool; I'm sure I wasn't.

When you are 22 you make mistakes. Well, I'll be 40 in a couple of weeks and I still make mistakes, just not ones that 22 year olds make. I made a lot of questionable decisions at that age. I got the only tattoo I dislike that year. The one thing I did right in 1992, may have been the one decision I made correctly. The MTV folk called again when I got back from New York. I had been told I was in final consideration for the cast. I later found out that I was probably in the top 20 to 30. While watching the episodes of the first season, I saw the show where Julie and Kevin yell and scream at each other involving some racial argument. I realized that for the rest of their lives people would see them at their most stupid and misunderstood. I never returned the answering machine messages. I never regretted my emotional, knee jerk, 22 year old decision.

The Situation will make over 5 million dollars in endorsements, appearance fees, talk show appearances, television cameos, and possible movie roles this year. He's a gym rat from New York who is 29 years old. His sole income is being part of The Jersey Shore MTV show. He is riding his 15 minutes of fame until there is no wave. Good for him. I watch his show. I laugh at his outrageous behavior and put on personality. It's brain rot, stress relief television for me. I wouldn't have been a "Situation" even had I made The Real World L.A. in 1992/1993. Those kids don't make much money. Few of them have any lasting fame. They do, however have their likenesses broadcast for eternity. They do have the dumb decisions they make at age 22 (or younger) etched onto people's minds forever. The few of you who read this blog and knew me at that age, know that having my early twenties existence broadcasting over and over for 18 years would have been painful for you, me, and whoever watched that channel.

Some people can give up part of their soul for fame and fortune. It looks like, almost everyone, has some price. I have moved from job to job looking for more money. The difference was, 4 camermen weren't documenting me going from concrete salesman to communications project manager. No one was walking around calling for the libertarian guy who obsesses over music and sports, talks with his hands and needs anxiety pills.

I'm sure one of these days, there will be a reality show about a fairly normal guy who loves his wife, has three awesome kids, trys to be a good friend, has a storm crazy golden retriever and manages his twitter and blog addiction with aplumb. I'll turn those producers down too. You don't want to see what divas my bunch would turn into with television deals, their own clothing lines, and bad pop music albums. Then again, 5 million would buy a lot fake happiness. Where's that MTV phone number, again?
Posted by Lance at Monday, August 23, 2010