The Lesson of Bret Michaels 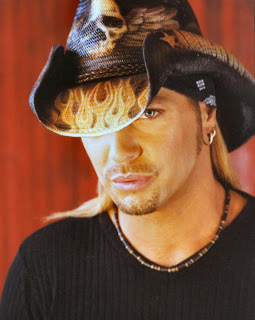 It's happening soon. I will become a man of a certain age. The age that rhymes with lordy and shorty. I haven't been handling the reality of my next birthday well. My wife and kids would say I havent been handling it at all. Then, a few days ago, while driving to the beach, that song by that guy, the one pictured above came on. 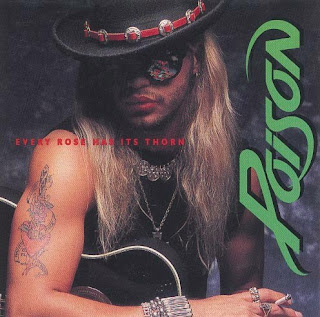 For years I hated Bret Michaels, his stupid, insipid, vaccous, glammed, marginally talented chick band Poison, and that God forsaken cheese filled power ballad Every Rose Has It's Thorn. Yeah, you know the song. Bret's on the road with his bunch of hair band superhero wannabes, he calls his stripper girlfriend, hears another dude's voice in the background, realizes he's been cheated on (like he didn't see that one coming) and pulls out an acoustic guitar and starts strumming "we both lie silently still in the dead of the night..." AHHHHH! No. I can't like this song. I can't like him. I can't even acknowledge that "instead of making love, we both; made our separate ways..."
That last paragraph was from me in my teens, my twenties, and even a portion of my thirties. They say the opposite of love isn't hate, it's indifference. Well since 1986 I haven't been anything but indifferent toward Bret. As I approach 40, I realize, that not only do I like Bret, but I relate to the man.
I know, I'm far from a rockstar. I'm a frustrated, wannabe rockstar, which is amusingly sad. I know music, but I don't play or write music. I critique, I don't make. I also do not have groupies, raunchy reality dating shows, bandanas, hair extensions, famous exes, and lots of money. How can I relate to the man from Mechanicsburg, Pennsylvania who may be the replacement for Simon Cowell on American Idol? Well, I stopped caring what other people thought of me, owned my past, and am trying to create my future by using who and what I am aided by those most important to me. Deep, huh? Well, a few years ago, I caught up with Bret, in a fan sense, I saw his interviews, read a lot about him, and watched his career. He wasn't the guy I swore he was.
The 90s and early 2000s weren't kind to Bret Michaels. A changing music scene ushered by Nirvana grabbed musical relevance away from his band, Poison. A chaotic personal life including a horrific motorcycle crash, mutilple high profile failed relationships, and a fued with his guitar player CC Deville that led to numerous lineup changes within Poison, along with financial issues caused by Bret's out of control rockstar lifestyle left Bret a cliche; the washed up misbegotten rock musician. Then he turned it all around. he got his band band together, took advantage of the nostalgia hair band music concert scene, and made a lot of money touring. His solo albums revealed a deeper, albeit mixed artistic output, music catalog that included country, soft rock, and blues that finally brought him some critical acclaim, which avoided Poison. Then Bret made a weird decision, that even those close to him say, they aren't sure was correct, he made his day to day life a soap opera we were welcomed to view. People decided, for the most part, they liked him and his life.
From my point of view, I decided, while a lot of Bret's music and reality show stuff I abhorred, I liked him. He was what he was, and he was cool with it. It took him 40 years to get to that point. Same with me. He seems to be a decent dad to two young daughters. I have three of those. He seems to like all forms of pop culture and isn't hamstrung by his hair band times; I've certainly changed my tune in those areas in the last few years as well. Most importantly, Bret presents himself as a dude of 47, who's really really cool with being 47.
I was in the car driving to the beach in Panama City. My wife flipped the radio from station to station. My teenaged daughter begged for hip hop or rap or something "from this decade". Then my wife stopped on that song. "Was it something I said or something I did, did my words not come out right...". I heard my teenager's voice in the back of the car, she was singing along with my wife and I. "Every Rose Has It's Thorn, every night has it's dawn. Just like every cowboy has his sad sad song..." Crap, Bret! You get me, my wife and my kid?! I realized being a sap may not be cool, but if it could bond me with my daughter, that was better than being a bitter music snob.
A lot of magazine articles are and will be written about Bret Micheals redemption, his comeback, his perseverance through recent medical troubles ; an appendectomy, a brain hemorrahge, and a hole in his heart. What those lazy writers are missing is, Bret isn't a lot different than a soon to be 40 year old communications manager who's been through divorce, death of family members, anxiety issues, and finding the love of his life two years ago. That's not redemption. That's living. Living honestly. Does any of this explain his surge in popularity despite not being a well respected, succesful musician any longer. Well, as Bret would say in Every Rose Has It's Thorn, "Yeah it does.."
Posted by Lance at Sunday, June 13, 2010