The Second Weirdest Year Of My Life

Now I know why Elvis shot his television. Last night I could relate. 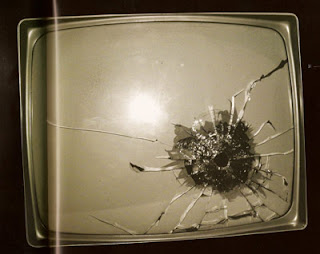 No; I know what you're thinking. Did Robert Goulet try to steal my girlfriend and sixteen years later I see him on tv and I took my drunken grudge out on my 25inch RCA by blowing a hole in it? I did not. First of all Robert Goulet is dead. Second, my wife is into members of the New Kids On The Block. As far as I know, none of them have contacted her. Yet, television made me bring back some weird, difficult memories last night. I seethed instead of shooting.

After the Braves beat the Rays 6-2, I flipped over to ESPN 2 and watched a riveting hour. The 30 for 30 Series debuted a new episode directed by Academy Award nominated documentarian Brett Morgen, called June 17th, 1994. While the show focused on one day in sports, news, and pop culture; it made me review my entire 1994 year.

The fourth year of the nineties saw me turn 24 in September. At the beginning of the year, I got a promotion from the job I was working; for editorial purposes let's say I worked for a retailer that looks like and rhymes with Tears. I drove 90 minutes to work every day, usually six days a week, and averaged about 12 hours a shift. It was hard, stressful, and ultimately fruitless. I was single the entire year, but because of my work schedule and my social circle all getting married or engaged I had neither time for a significant other nor the ability to find one. In April, the dude who changed the way I listened to music, Kurt Cobain, decided suicide was better than artistic Nirvana.

I did see attend the two greatest rock shows I can recall. In April, just before Kurt shoots himself, his rivals, Pearl Jam, shook the Fox Theatre to his foundation with an incredible concert, broadcast live over Atlanta radio. My ears are still ringing. In August I traveled to the Meadowlands in New Jersey to see The Rolling Stones' Vood Doo Lounge show. Mick and the boys were at the top of their game that night. I rode into New York City and saw a punk show at CBGBs for the first time. I stayed up all night in Times Square afterwards. I still haven't caught up on my sleep.


What brought on these memories was that ESPN show. Without the usual narrative; just highlights, news clips, live conversations, and coverage of the events of June 17, 1994; I was transported, mentally, to 16 years ago. I realized that day combined with the other happenings that year including Kurt's death, a baseball strike, and a white Bronco carrying a lost soul named O.J. changed me. I challenge that it changed all of us.


O.J.'s 35 mph police chase around the Los Angeles area opened a chasm in American culture. People lined the freeway, cheering for a likely double murderer and L.A. police, still reeling from the Rodney King beating 3 years earlier, and the riots following the aquittal of the beaters two years earlier; saw themselves portrayed as the Wil. E Coyote in the chasing of the O.J. roadrunner. Now, a former professional athlete, mediocre actor, and beloved celebrity pitchman drew the attention away from Arnold Palmer's Final Round ever at The U.S. Open, Ken Griffey Jr.'s baseball heroics (he hit his 30th home run on June 17th, the earliest that had ever been done), the opening game of the World Cup being held at Chicago's Soldier Field (Germany beat Bolivia 1-0), the New York Rangers celebrating their historic Stanley Cup with a parade down Broadway, and game five of the NBA playoffs between the New York Knicks and the Houston Rockets. The ESPN 30 for 30 showed the NBA Finals being split screened on NBC with the O.J. reality tv drama. The Real World people at MTV want to tell you they started this reality tv trend. They're wrong. It started that night in June. Almost 100 million people watched O.J. and his white Bronco being chaffeured by A.C. Cowlings. Court TV was created to follow the O.J. legal drama. CNN changed the way they covered stories. Los Angeles tv stations now show every single police chase, regardless of the people involved, because ratings show you are supposed to.

Personally, I never liked baseball as much as I did before August 12, 1994 when the game shut down. I never idolized another music person after Kurt killed himself. I measured musical acts to those two shows I saw in April and August and none have rated as high. I stopped chasing money as hard as I did with that job at "Tears". It wasn't worth the stress. I started looking too hard for someone to marry, and thus married the wrong person a few years later. I became more cynical, seeing people cheer O.J., seeing people so divided (misguidedly) over race, and I even became more angry about political issues, thus hurting relationships.

Don't get me wrong. I'm not blaming Orenthal James Simpson, a white bronco, a shotgun blast in the Pacific Northwest, my 27 inch Phillips or that crappy job. I'm reflecting on a weird, stressful, odd time in my life that essentially killed some innocence and my need for any nostalgia. It all worked out many years later. That year was different than most. I guess I should thank tv. It made me realize how I got to the great place I'm at now.