I Feel Stupid and Contagious

Two hours of my life now belong to a crazy person. Monday Night I watched 120 minutes of VH1's Behind The Music on Courtney Love. Here's the rub, I can not stand the woman; yet I was transfixed the entire time. Love's notoriety is being the widow of Nirvana frontman Kurt Cobain, who killed himself on April 8, 1994. Love later became a successful leader of her own band, Hole, and an award nominated actress for her role in The People Vs. Larry Flynt. Preceding that entertainment resume she was a teenage runaway, stripper, movie extra, musician in several failed bands, and a drug addict. Since her 1990s success, she went back into drugs and many high profile failed relationships. There was even a 1997 documentary accusing her of killing her late husband. To say Courtney Love is polarizing is like akin to saying The North Pole is cold. Watching the show, I realized that she was the anti-Bret Micheals (see previous blog). Artistically and culturally she has offered the world something to admire. Hole's albums Pretty on the Inside and Live Through This (realized 4 days after Kurt's death) are 90s touchstones of alternative rock. The glossy, riff heavy Celebrity Skin record she made with Hole in 1998, while not as critically judged, sold millions and establised her own musical legacy. Yet, Love may be one of the most irresponsible, unlikable humans I have ever witnessed. What she offers, personally, is complexity and a fascinating personality. Unlike Michaels, whom, I envision would make  afun BBQ companion and seems like a good father and solid dude; Love is a mess who I wouldn't want to spend more than a few minutes around. 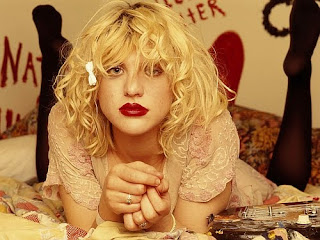 I was and still am a Nirvana fan. I think Kurt Cobain was a talented, tortured soul who wrote tight, interesting songs that will be listened to for years. His insousiance with fame makes him even more intriguing. It's a shame that his heroin habit, and gross depression took awya the chance to understand him as a songwriter and artist. I had never heard Courtney's version of events surrounding their marriage and Kurt's death. While Behind The Music covered her difficult childhood and driven path to fame I couldn't connect with her at all. I did gain some respect for her in regards to what it must have been like to be hated and villified for being Krt's wife, widow, and caretaker to his belongings and his legacy. 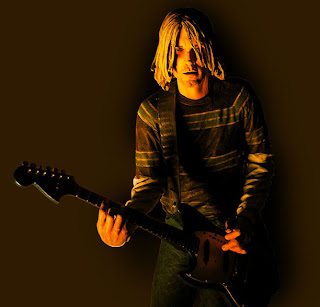 Tuesday morning I turned the ringer on my phone on, because I was driving my wife's car which currently has no air conditioning. I knew I wouldn't be able to see or hear the vibration. My friend Kraig, who I met the second day of my freshman year of college and talk to several times a week, called. I knew he had watched the Courtney Love Behind The Music, despite not being a fan of hers, Kurt's or Nirvana. Smells Like Teen Spirit began to play. The first sixteen seconds including that unforgettable riff echoed through the car. Like any good song, memories started to happen and while Kraig profanely ripped Love, VH1, Seattle, and everything associated with the subject, I started to realize what Cobain and Love had done to contribute to music and popular culture.

After Kurt's death, I grew quite cynical. I no longer looked at rockstars as people to idolize. I separated music from the person making it. It allowed for less anger and less disappointment. Kurt and Courtney did one thing well, they wrote about their angst, alienation, loneliness, drug madness, and random thoughts and composed very good songs. Everything else in their lives were adject faliures. Kurt said it in his note ":The worst crime I can think of is ripping people off by faking it..." Neither he nor Courtney possessed the ability to get over their stuff and tough it out through life, they saw it as fake.  Well, I can't sugar coat their lack of functionality and how that sucks for those around them who needed them and those those around them who wanted more for them.

This isn't the blog where conspiracy theories are bandied about. This is the blog where Smells Like Teen Spirit is enjoyed for the incredible riff, the brilliantly composed chorus and the non sequiters strew together as grunge poetry for the pissed off and left out. Part of growing up is learning how to compartmentalize. You can appreciate someone's art, and find the artist lacking. You can put things into context and not endorse anyone's way. In a weird, almost accidental way, us 1990s people, Generation X, if you must label, are much more learned than the 1960s people who actually think they changed the world. Today, in this age, we know that you change yourself, and how those around you respond, brings change in the world.
Posted by Lance at Friday, June 25, 2010