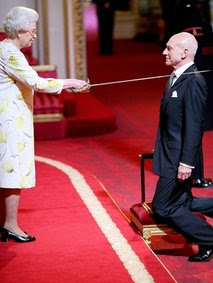 Sword on your shoulder, royalty making you, a country in awe, then the alarm clock goes off. It's happened to me several times. Maybe it's because my name is Lance. Maybe it's because Sir Lancelot was one of King Arthur's Knights of the roundtable. Maybe because I grew up near and come from a family that largely went to, Central Gwinnett High School, whose mascot is the Black Knight; but I have always been intriqued by Knights and being Knighted. Today in England, Queen Elizabeth performed the Knighting ceremony on actor Patrick Stewart.

Stewart is a 69 year old British actor, best known for playing Captain Jean Luc Picard on Star Trek The Next Generation and Professor Charles Xavier in the X-Men movies. he's a well respected and well-decorated stage actor, known for expertise in Shakespearean plays like Macbeth. He joins a long list of actors who have had the honor bestowed on them including Alec Guinness, Laurence Olivier, John Gielgud, Micheal Caine, Anthony Hopkins and Sean Connery.

I am an American, thus not eligible for the Knights of Bachelor title and ceremony, yet I remain impressed and envious. I can't even get my kids to to call me sir. That's probably the main reason I want to have it done to me. Nonetheless, I have concluded that other than punk music, the one thing the English do better than us Americans is honorable ceremonies. Yeah, we induct people into Hall of Fames and give out Congressional Medal of Honors but outside of my Worl's Best Dad t-shirt my little ones gave me, which shrunk (my fault), somebody laying a sword on me and calling me Sir, that's the coolest.

I just wonder what a chainmail outfit would look like on me. Awesome, probably. Now boldy go to the gym and work on that gut Sir Lance! Yes, your highness.
Posted by Lance at Wednesday, June 02, 2010