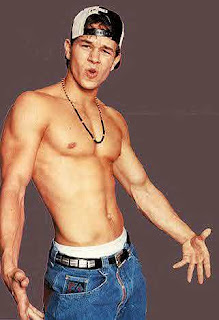 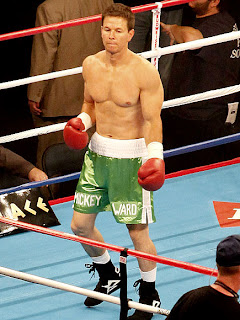 Since I am more of a music person, I don't get too fired up about movies that are coming out. Next week, Mark Wahlberg, not this ^Mark Wahlberg but this ^Mark Wahlberg: will portray former welterweight boxer Irish Mickey Ward (seen in a trio of fights with Arturo Gatti in the youtube video shown above ^) in a film called The Fighter. I recommend giving it a watch. Ward's life story is fascinating. The Ward family was from a hardscrabble existence in Lowell, Massachusetts. The father was absent and their mother was tougher than most boxers. She managed two of the sons, Mickey and half brother Dickie Eckland (played by Christian Bale in The Fighter). Dickie later became a crack addict, profiled by HBO's America Undercover, although he was a former fighter whose career ended in 1985, and he trained Mickey Ward for 26 fights before getting back on drugs. Ward broke his hand and lost four straight fights in the early 90s. He left boxing for three years, worked on a road paving crew, then financed his own operation to graft bone from his pelvis to his hand, and made a comeback in 1994. By 2002, Ward was a contender for the title and faced Arturo Gatti in the 3 epic fights shown in the video I posted. Mickey Ward won Boxing's Fight of The Year 3 straight years in the early 2000s. He was known as a real life Rocky Balboa. In many ways, Ward's story is better than the fictional one Sylvester Stallone wrote for his Rocky movie over 30 years ago. The irony of all of this is today, Stallone was inducted into the Boxing Hall of Fame today for his FICTIONAL contributions to boxing.

Ward and Gatti fought like I had never seen before. Two men, refusing to give in for 3 fights, 30 rounds, and so much damage to their bodies. Ward never fought again after the third Gatti fight.  He retired with a record of 38 wins 13 losses and the respect of the boxing world. Ward and Mark Wahlberg became friends and Ward and his brother Dickie moved into Wahlberg's house while making The Fighter. I have been a spurned lover of the boxing game for many years. Two years ago, I trained as a boxer for about six months nefore my gym closed and I started traveling for work. I'm 5'8" and when training properly, between 160 -165 lbs, which is a middleweight, my favorite boxing division. Ward and Gatti are the same height as me, and watching them fight was inspirational, physically and emotionally. I am anxious to see the movie. i just hope it's not so successful that Mark Wahlberg's becomes a boxing Hall of Famer.

Go see it, here's the trailer: http://www.youtube.com/watch?v=Hwv7kT9P0mg It also has Amy Adams from Enchanted as Mark wahlberg's love interest. I will be making the $9 dollar investment, Hope I get knocked out by a good story.
Posted by Lance at Tuesday, December 07, 2010