I find nostalgia nauseating. I don't even like looking into my past in an analytical way. Yet, the other day of my my twitter followers and fellow bloggers, @SugarJones asked this question;  "Do you ever have those moments where you wonder how you got to where you are? And how drastically different it is than what you had planned? " I answered "yes....that what my blog is about...well, when im not writing fiction, Im writing about how the heck I got here" This caused a rare moment of rear view mirror philosophizing.

Indeed, this blog isn't really about topics like music, writing, television, my family, or sports. It's about how the heck I became and am becoming who and what I am. I just never thought Howard Stern interviewing the Piano Man would be the catalyst for a revealing blog post. I was in the car a lot today for work and my new love, satellite radio, was whispering sweet somethings in my ears. I turned to Howard Stern's morning show and for an hour and forty seven minutes he interviewed Billy Joel. My memories start at age 5. Between then and say age 12 I thought Billy Joel was the biggest rock star in the world. I had yet to discover most of the music you see me blog about. Piano Man, Cold Spring Harbor, New York State Of Mind, Captain Jack, Scenes from an Italian Restaurant, The Stranger, It's Still Rock and roll to Me, My Life, Im Movin Out, Say Goodbye To Hollywood, Just The Way You Are, Only The Good Die Young, You May Be Right, and so many other songs were played in my parents' house and car. Joel was a superstar on the radio and tv when I was a kid. I developed this fake, stupid, New York attitude, speech, and manner to copy Joel. Finally, when I was 11 and a half year old I made it to my first concert, Billy Joel's Nylon Curtain tour in the Omni in Atlanta, Georgia. After the show as I was walking out, a man with a harmonica played the first few bars of Joel's signature song, Piano Man, and several dozen people on escalators started singing the song. It was surreal. Here's the kicker to this story and this blog, I had forgotten almost all of this until this morning. 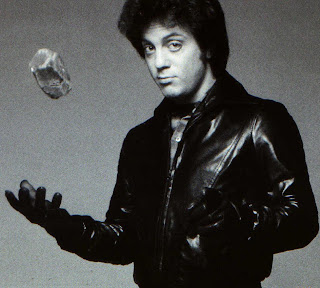 Music snobbery didn't start for me until my early teens. By 1983, I had put Billy Joel away, along with my comic books, stretch armstrong, and baseball cards. Joel wasn't cool to me anymore. I certainly wasn;t buying into Uptown Girl and him marrying Christie Brinkley. Hearing the interview this morning brought back something that I really screwed up in my life, a sense of camraderie with normalcy. Billy Joel is kind of a dork, a regular dude. These days, he's bald, pudgy, grayed, and well, basic; you know, for a multi millionaire. He runs a motorcycle shop, which loses money, for fun. He hasn't made a pop song since 1993, and doesn't to. What attracted me to Joel when I was a kid, was what I later rejected. He made good pop songs with no pretention. Joel never tried to save the world. He rarely whined about the state of the world, with a few exceptions, like Allentown. When he did do a song that was personally relatable and "about" something other than himself and relationships, like Pressure, he made it sound enjoyable, not angst ridden. Now that I am 40 I found a conduit to my childhood without relinquishing maturity. As I write this I am playing youtube and the songs that I admired in the 1970s aren't just bringing back memories, they're causing me to plan new ones. I am going to introduce Joel to my kids this weekend. I remember driving in the car with my dad playing air piano to the Turnstiles album and 52nd street, and Glass Houses. My 45s of Piano Man and Just the Way You Are and My Life will be turned into itunes purchses for my girls. Joel was a good songwriter. I maintian my music snobbery as most of what he made after 1982 is quite weak and I doubt I will change my mind. Joel is one of those things or, well, I guess, people that got me here. I wore tennis shoes with suits and huge sunglasses as a kid, because I was a dorky normal little guy. It was Billy Joel that got me through some of those New York Jet losses in the early 1980s. It was Billy Joel who made me use a hairbrush as a microphone when me and a buddy or two would have spend the nights before MTV came along. It was Billy Joel who told me bedtime stories that I should have never forgotten. I may have put him away when hard rock, hair metal and later, punk changed my focus, but pulling Billy Joel out every once in a while when I want to go to Vienna or I;be Got To Begin Again or take a Miami 2017 is perfectly understandable.

I usually don't recommend Howard Stern, because of his show content but if you are so inclined, go google the Billy Joel interview. The musical stories are priceless and Joel personality is irrepresible. For the musicologists out there, this website is great for breaking down Joel's great songs, I agree with everything from 1972 to 1982, after that, listen at your own risk
http://hubpages.com/hub/50-Essential-Songs-by-Billy-Joel

The greatest thing about the Billy Joel interview and the subsequent reminiscing is I am listening to some really good songs and discovering what this blog is about. This is one heck of a break from fiction writing. "Don't go changin to try and please me, you never let me down before, don't imagine you're too familiar and I don't see you anymore." Ugh, I should have listened to Billy Joel over the past twenty years, I could have saved myself some Pressure.

You May Be Right, i may be crazy : http://www.youtube.com/watch?v=Jo9t5XK0FhA